CHILDREN SHOULDN’T PLAY WITH DEAD THINGS: Everyone Had to Start Somewhere 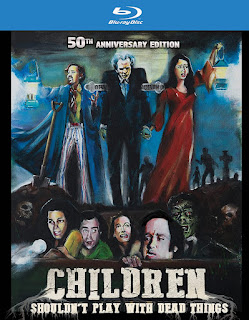 Children Shouldn’t Play with Dead Things is one of the most awesome titles in history, even if the movie itself isn’t any good. Touted as a horror-comedy, it’s neither scary nor funny, though certainly plenty weird. You would have had to be psychic to predict director Bob Clark would someday find great success in a variety of genres, to say nothing of being responsible for one of the most beloved Christmas movies of all time (and no, I don’t mean Black Christmas).

But that’s what makes this 50th Anniversary Edition Blu-ray so interesting. Everyone had to start somewhere, and like some of his contemporaries, Clark cut his teeth on regional low-budget horror before joining the big leagues. But unlike the Carpenters, Cronenbergs and Cravens of the world, Clark quickly left horror behind. It’s always fun to go back to visit a successful director’s humble beginnings, but the fact that Children Shouldn’t Play with Dead Things was the brainchild of the same guy who’d soon give us Tribute, Murder by Decree and A Christmas Story is morbidly fascinating.

He didn’t do it alone, though. Alan Ormsby was his partner-in-crime in those salad days, doing triple duty here as an actor, co-writer and creator of the make-up FX (which are actually pretty good). Ormsby pops up a lot over these two discs, which largely serve as a tribute to the late Bob Clark. The movie is no great shakes, but the 90-minute documentary that comes with it is an affectionate bio and summary of the director’s early years, as well as an excellent look at independent filmmaking during the '70s, recalled by those who worked closely with Clark for a number of films. The documentary alone is worth the price of admission.

The film has a pretty large cult following today, evidenced by a bunch of other bonus features, such as music videos, fan tributes and a couple of revival screening Q&As, where Ormsby amusingly admits he and Clark were inspired by Night of the Living Dead enough to rip it off. So while Children Shouldn’t Play with Dead Things is definitely no NOTLD (not even close), there’s a lot of interesting horror history to be found here.

GRINDHOUSE Q&A - This one is really hard to hear.

MEMORIES OF BOB CLARK - Audio tribute to the late director.

CONFESSIONS OF A GRAVE DIGGER - Interview with Ken Goch…who really did dig a bunch ‘o graves for the film.