HEARTLAND OF DARKNESS: Linnea the Legend 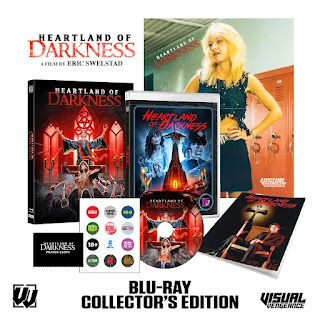 Heartland of Darkness is a low-budget horror film completed in 1989. Like a lot of homegrown fright flicks back in the day, it was regionally produced (in Ohio) by a cast & crew armed with more ambition than resources. Still, they managed to snag the lovely Linnea Quigley to boost its marquee value.

Unfortunately, the title never did grace any marquees, nor did it end up fighting for shelf space at Blockbuster or any other video store. In fact, Heartland of Darkness is just now being released for the first time. In the interim, it sort of became the stuff of cult legend as Linnea Quigley’s lost film. Though not actually appearing in too many scenes, she definitely leaves an impression…for the same aesthetic reasons that made her a B-movie scream queen in the first place. If nothing else, watching this film today is a vivid reminder of her uncanny ability to stir impressionable young hearts (among other things).

As for the movie itself, Heartland of Darkness is neither the best nor worst budget-conscious creepfest from the era. The story features a journalist who moves to a small town and investigates a series of gory murders, which turn out to be the work of a satanic cult led by the local pastor. It’s standard stuff and somewhat derivative. Like all small towns in 80s horror flicks, most of the population belongs to the cult.

Still, it’s well made on a limited budget, with a bonkers final act that throws in car chases, snipers and a psychotic body-builder. But hey, if you can’t go big, you might as well go a little crazy, which probably explains casting Quigley as a History teacher while still tarting her up like a Hollywood chainsaw hooker. Elsewhere, the performances are generally pretty pedestrian, but overall, the film is fast-moving, efficiently directed and occasionally atmospheric, with some good, bloody kills here and there.

But even if one doesn’t agree, this Blu-ray is packed with goodies and the movie’s backstory (and its long, hard road to finally being released) is fascinating and discussed at-length in some of the bonus features. In addition to a few amusing bits of swag, the mixture of new and vintage extras conveys a charming can-do spirit on both sides of the camera. None of those involved had any illusions about the type of film they were making - or its quality - but we’re certainly able to appreciate what they accomplished.

“DEEPER INTO THE DARKNESS” - A great 40-minute retrospective documentary featuring varios cast & crew, including director Eric Swelstad and actor Nick Balasare. Easily the most entertaining of the bonus features.

2 LINNEA QUIGLEY INTERVIEWS - One is brand new, the other is an archival interview done for a local Ohio TV show.

“THE MAKING OF FALLEN ANGELS” - Archival interview from back when this was titled Fallen Angels.

INSERT - Includes an essay, “The Devil Went Down to Ohio,” and tech credits.

VHS STICKERS - Sheet of the type of stickers you used to see on rental boxes.

REVERSIBLE COVER - The other side features Blood Church title & artwork.