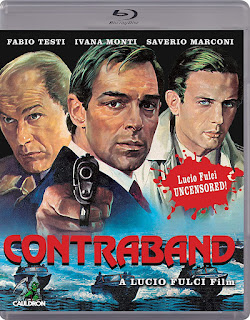 In 1980, Italy’s most rambunctious rascal, Lucio Fulci, took a break from the usual undead antics to try his hand at Poliziotteschi, the lurid Italian subgenre that typically amps up the standard police thriller with heaping helpings of violence, vengeance, corruption and cruelty.

Contraband features Fabio Testi - no stranger to the genre - as Luca, a mid-level gangster who runs a cigarette smuggling operation with his brother, Mickey. When Mickey and a few other associates are murdered, Luca initially suspects his competitor, but later learns it’s the work of sadistic crime boss known as Il Marsigliese (Marcel Bozzuffi), who’s trying to muscle in. Despite objections from his beleaguered wife (Ivana Monti), dealing with dirty cops and a suspicious partnership offer from Il Marsigliese, Luca vows revenge…with help from some of the mafia’s old guard.

Never particularly complex or profound, Contraband compensates with plenty of action and violence. While he certainly has his share of fans, I’ve always been of the opinion that Lucio Fulci was a director bestowed with more audacity than ability and this movie didn’t change my mind. On the other hand, say what you will about his lack of finesse (or class), he knows how to grab the viewer’s attention and isn’t above wallowing in depravity to keep it. I wouldn’t go so far as to say Contraband is a good film, but it’s never a boring one.

But for a while, it seems surprisingly tame by the director’s sick standards. There’s the usual graft and guns, competently shot but indistinguishable from countless other Poliziotteschi movies. But fear not, Fulci fans…he eventually reminds us why he’s called the Godfather of Gore, with blow-torched faces, exploding throats, blasted skulls and machine gun disembowelment. And if that ain’t enough, he throws in some gratuitous nudity and a leering rape scene. During the climax, the man even steps out from behind the camera to participate in the mayhem.

In other words, Contraband ends up being classic Lucio Fulci, perhaps with better overall performances and a more cohesive story than his usual gorefest. He’d return to horror almost immediately afterwards and never look back, but seeing him apply his twisted talents to a completely different genre makes for interesting viewing.