PANTHER and the Unfair Comparison 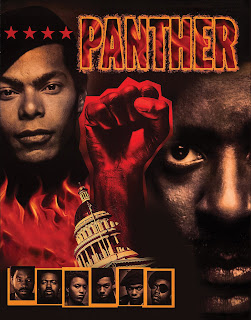 This might be an unfair comparison, but because Judas and the Black Messiah was such a sweeping, intense and emotionally harrowing film (which should have won the Best Picture Oscar that year), 1995’s Panther seems quaint and simplistic.

It has nothing to do with age. Panther may be pushing 30 years old, but its depiction of late-60s San Francisco looks and feels authentic. And though the subject matter of both films is similar, the plots are somewhat different. Panther chronicles of the evolution of the Black Panther organization from peaceful protesters to a more militant group, as seen through the eyes of Judge (Kardeem Hardison). He’s initially reluctant to join, but after witnessing injustice and police brutality in his neighborhood, Judge sides with the Panthers and is especially loyal to Huey P. Newton (Marcus Chong), the most dangerous member of the party (in the eyes of the establishment anyway).

The glaring difference is in the direction, writing and characters. Director Mario Van Peebles structures it similarly to his best film, New Jack City, complete with plenty of observational commentary. But whereas Judas and the Black Messiah is complex, thought-provoking and features rich, dynamic characters, Panther has the subtlety of a mallet. Whether or not it takes considerable creative liberties with facts isn’t really the problem (I don’t generally watch movies for a history lesson). However, the film boils its themes down to simple good vs. evil, which may indeed be true, but from a dramatic perspective, such an approach renders the narrative pretty rote, as do the frequent montages used in lieu of real story development.

Most characters are one-dimensional and speak in preachy statements that seem more intended for the audience than anyone else on-screen. This includes the film’s numerous antagonists, all of whom are mere caricatures. Additionally, Panther is often glaringly stagy - almost choreographed - such as numerous shots of a Panther standing defiantly against the opposition while his/her crew - arranged like a pop star’s back-up band - glare menacingly behind them.

Some of the blame must go to Mario’s dad, the late Melvin Van Peebles, who wrote the screenplay (based on his novel). While his heart may have been in the right place, the heavy-handed dialogue sounds like the writing of an angry high-school journalist. However, Mario himself bears most of the responsibility. Panther looks great, has some undeniably effective scenes and features a killer soundtrack. But considering the subject matter, the film is ultimately too histrionic, repetitive and shallow to have any lingering impact.