5-25-77 is an Affectionate Piece of Nostalgia 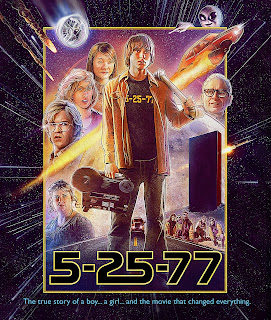 The title refers to the date the original Star Wars was released. The film, of course, was a cinematic milestone. For better or worse, it changed how movies are made, marketed and watched. To truly appreciate its massive cultural impact - especially on us impressionable kids - you really had to be there.

Writer-director Patrick Read Johnson was there. In fact, as a teenager, he was apparently the first person allowed visit ILM and see an actual workprint of Star Wars. How cool is that? While that moment is the lynchpin of this semi-autobiographical film, it isn’t what drives the narrative. In a way, Star Wars could be viewed as this film’s MacGuffin.

Instead, 5-25-77 is a whimsical recollection of an awkward, teenager whose obsession with watching and making films isn’t appreciated - or understood - by his peers. This was back when being a sci-fi geek tended to make one sort of a pariah in certain social circles. Star Wars would go a long way in changing that perception, but until then, Pat Johnson (John Francis Daley) feels somewhat isolated. Though he has friends, they're typical of everyone else in his tiny hometown, content to spend the rest of their lives doing the same thing every weekend. No one can relate to his aspirations of being a director. To them, making movies is simply a hobby Pat should have outgrown by now.

Though it apparently took him several years to complete, Patrick Read Johnson has put together a perceptive, charming love letter to a bygone era and packed it with a shitload of film/TV references old school sci-fi fans are sure to get a kick out of. But what makes 5-25-77 somewhat unique among coming-of-age films are the technical aspects. Scenes are frequently enhanced by iconic vehicles, spaceships and objects from films which influenced the main character (such as 2001, Duel and Silent Running), symbolizing the many narrative turns and Pat’s tumultuous headspace. While the intentional ‘phoniness’ of the special effects reflect the technology of the era, they also help the film achieve an almost dreamlike atmosphere.

The film is wonderful during those sequences. Elsewhere, it tends to drag at times, particularly Pat’s interactions with a few haphazardly-realized supporting characters (not helped by some pedestrian performances in key roles). And at 130 minutes, it’s way too long. You could easily trim a half-hour - including an entire teen party sequence - without adversely affecting the narrative. But for the most part, 5-25-77 is a congenial, affectionate piece of nostalgia about how a pivotal moment in movie history changed a kid’s life.