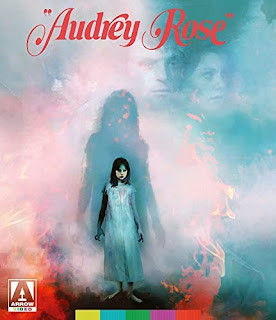 Frank De Felitta’s Audrey Rose was another pulp-ilicious paperback everyone was reading in the ‘70s. Like Thomas Tryon’s Harvest Home and William Goldman’s Magic, it was a horror novel for folks who normally didn’t go in for such things. My mother even read it, and knowing my love of Stephen King, passed it on to me. I got maybe halfway through before concluding that the main thing missing was any actual horror.

The inevitable movie came out a couple of years later, its PG rating assuring the timid that they wouldn’t put their souls at risk. Since it was playing at the Southgate Quad - where I hung out almost every weekend - me and some friends checked it out (more than once because it played there for over a month and we did a lot of theater hopping back then).

Sure enough, Audrey Rose is pretty light on terror, but at least faithful to the book (as far as I got into it, anyway). Still, the film does have some disturbing elements that are more effective visually than on the printed page. The story features Marsha Mason & John Beck (you know, the Rollerball guy) as Janice & Bill Templeton, an affluent New York couple whose daughter, Ivy (Susan Swift) experiences extreme night terrors and signs of being possessed.

They’re also being watched by a creepy stranger named Elliot Hoover (Anthony Hopkins), who lost his wife and daughter, Audrey Rose, in a car crash 11 years earlier. He claims that Audrey Rose was reincarnated as Ivy, which is why she experiences the night terrors (in which she repeatedly relives the fiery crash that killed her in the first place). Elliot is also the only person able to comfort and calm her down. Though Janice is increasingly convinced that Elliot’s telling the truth, Bill still thinks he’s a crackpot (especially after Elliot kidnaps the girl). This leads to a trial in which Elliot claims to be Ivy/Audrey Rose’s real father - using the trusty ol’ reincarnation defense - while Bill & Janice’s marriage hits the skids over the whole thing.

Courtroom drama doesn't have much of a place in horror. Until the trial, Audrey Rose is never scary, but the story is fairly interesting. Ivy’s “episodes” are intense, while the helplessness experienced by her parents earns our sympathy. The performances are pretty decent, too, though Swift is really only engaging during her “possession” scenes. To the surprise of no one, Hopkins shines in his role. But all momentum is lost once the trial begins. The story grows more ridiculous and heavy-handed…even preachy when a Hindu priest is brought in to “legitimize” Elliot's defense. Further sucking our attention away is Elliot’s defense lawyer, Brice Mack, comically overacted by Robert Walden.

Audrey Rose recovers a bit during the final act with a tense, harrowing hypnotism session and a conclusion which - if one hasn’t read the book - might surprise a lot of viewers. But while Robert Wise directs the thing with his usual class, this ain’t a return to The Haunting territory. Like the original novel’s homogenized horror, Audrey Rose is a scary movie made for those who don’t actually want to be scared. As usual, Arrow Video gives the film a nice restoration and throws in some interesting bonus material.

“I’VE BEEN HERE BEFORE” - An analysis by critic Lee Gambin.

“INVESTIGATOR: THE PARANORMAL WORLD OF FRANK DE FELIITTA” - The late author discusses his career. This is the best of the bonus features.

“THE ROLE OF A MOTHER” - An interview with actor Marsha Mason.

“HYPNOTIST” - Interview with Daniel Schweiger, who talks about the film score.

“NEVER BIRTH NOR DEATH” - Tour of the film’s locations, then and now.