A KNIFE IN THE HEAD...But Not Really 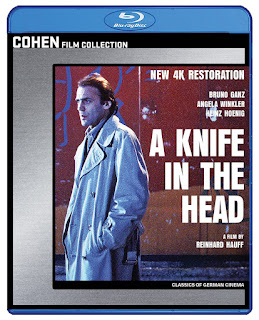 Actually, Berthold Hoffmann (Bruno Ganz) takes a bullet to the head. The “knife” of this German classic is metaphorical.

He’s shot while running through the headquarters of a radical left-wing group, presumably by the cops raiding the place. Not only does he suffer brain damage, but he’s also lost most of his motor skills. Doctors are hopeful for a full recovery, but it could take a long time. The police, led by Anleitner (Hans Christian Blech), suspect he’s faking his condition and is actually the leader in a conspiracy against the government. Meanwhile, Hoffman’s estranged wife, Ann (Angela Winkler), and her new lover, Volker (Heinz Hoenig) - who are radicals fighting police brutality - are certain he’s being set up.

The bulk of the narrative features Hoffman’s slow recovery. As his physical abilities begin to return, so does his memory, though he may never recover fully. At first, neither he nor the audience is certain about the events that night, but as the story unfolds, it becomes apparent that he’s something of a pawn for both sides. Hoffman himself grows distraught, angry and determined to find out why he was shot in the first place.

Other than repeatedly establishing Anleitner as infuriatingly ruthless, the plot surrounding the shooting is seldom particularly involving, nor do we ultimately care about Ann. However, we certainly sympathize with Hoffman and all he’s lost because of the incident. He was once a successful doctor and we suspect he still loves Ann. There’s nothing left of his old life and Ganz conveys that despair brilliantly. In fact, his remarkable, harrowing performance is the main reason A Knife in the Head remains so involving.

Though the overall story arc is somewhat perfunctory, it does lay the groundwork for an emotionally-charged climax. By this time, we’re invested enough in Hoffman’s painful road to recovery that no one could blame for going postal on those who’ve wronged him. Instead, we’re somewhat blindsided by a haunting denouement.