Here's Looking at CASABLANCA in 4K 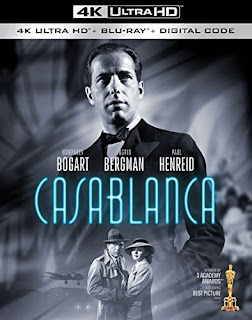 I remember watching Casablanca one time with a girlfriend who had never seen it. This person was sort of a dim bulb who constantly rolled her eyes or laughed at most of the film’s classic lines, ignorantly remarking that she’d heard them all before.

Well, of course, she had. Few films in history have been as endlessly quoted, ripped-off and parodied as this one. Even those who’ve never actually seen it are familiar with “We’ll always have Paris,” “Here’s lookin’ at you, kid” or “This could be the beginning of a beautiful friendship.” So much of Casablanca’s dialogue, performances and imagery have become so ingrained in pop culture that they’re simply cliches, tropes or memes to those unaware of their origins.

I suppose that could be a testament to the film’s timelessness. As for that girlfriend, Casablanca remained in my life a lot longer than she did (especially after she tried to fansplain the reasons Flashdance had a better love story). In fact, Casablanca is one of the few films I’ve owned in every video format, looking and sounding better with every upgrade, peaking with the massive 70th Anniversary Boxed Set released in 2012. Surely that would be the definitive version. And for those who love accoutrements related to all-things-Casablanca - and its studio, Warner Bros - it probably still is.

This new 80th Anniversary 4K Ultra HD release is strictly for the videophiles, who won’t be disappointed. As good as the previous Blu-ray’s imagery was, this one is even better, revealing more depth and detail (no small task with movies this old). The audio gets a significant upgrade, too, presented with a Dolby Digital 2.0 mono mix. As for the accompanying Blu-ray, I’m pretty certain it’s the same as the one released in 2012. With the exception of a Lauren Bacall intro and audio commentaries, the bonus features are included on the Blu-ray disc, all of which are carried over from previous editions. Though not nearly as comprehensive as the 70th Anniversary set - no coasters, posters or books, either - there’s a lot of good stuff here, which is outlined below.

It goes without saying that Casablanca belongs in every collection. Whether or not this edition does depends on what one wants out of the experience. The 4K technical specs make this the best the film has ever looked, and if that’s what matters most, it’s a must-own. For additional bells & whistles, older editions already have that covered pretty extensively.

“GREAT PERFORMANCES: BACALL ON BOGART” - The best of the bonus features (on this release anyway), Lauren Bacall hosts this feature length doc about Humphrey Bogart.

FEATURETTES - “Michael Curtiz: The Greatest Director You Never Heard Of”; “Casablanca: An Unlikely Classic”; “You Must Remember This: A Tribute to Casablanca”; “As Time Goes By: The Children Remember”

“WARNER NIGHT AT THE MOVIES” - This option allows the viewer to experience movie night the way it used to be, with a trailer, cartoons, a newsreel and a short subject, followed by the film itself.

“WHO HOLDS TOMORROW?” - A TV episode based on the film.

“CARROTBLANCA” - Looney Tunes parody made in 1995.