THE OFFER: The Godfather's Big Backstory 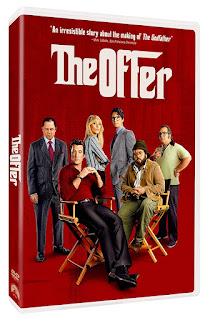 The making of a single movie hardly sounds like a compelling story for a nine-hour miniseries. However, we’re not talking about just any movie. And since the history & people behind it have become somewhat legendary themselves, The Offer is a great-looking, entertaining dramatization of the movie business during a tumultuous time in one studio’s history.

The Offer chronicles the making of The Godfather, based on the personal experiences of producer Albert S. Ruddy (Miles Teller). Possessing little more than ambition and audacity, he falls under the tutelage of Paramount’s head of production Robert Evans (Matthew Goode), who entrusts him to oversee adapting Mario Puzo’s suddenly-hot and incendiary novel to the big screen.

The stakes are pretty high for Paramount, which has been struggling so badly that parent company Gulf + Western, headed by profit-obsessed Charles Bluhdorn (Burn Gorman), is considering selling it off. Getting The Godfather off the ground is a seemingly insurmountable task for a neophyte producer. Throughout the production, Ruddy is forced to deal with penny-pinching corporate lawyers, Evans’ unpredictability, headstrong director Francis Ford Coppola, clashes over casting, mafia threats and the toll on his personal life. As shown here, it’s a minor miracle the film ever got made at all.

Most of the main characters are pretty engaging. Ruddy is a likable protagonist, even when making questionable decisions. His assertive secretary, Bettye (Juno Temple), is not only an unsung behind-the-scenes heroine, she ultimately serves as Ruddy’s moral compass. Since the real Bob Evans had a pretty notorious history, his fictional counterpart is highly amusing. On the other hand, the antagonists are all broad, one-note caricatures, especially mafia don Joe Columbo (an irritating performance by Giovanni Ribisi), bug-eyed gangster Nicky Barnes, Frank Sinatra, Bluhdorn and his uptight lawyer, Barry (Colin Hanks).

Though one doesn’t need to be familiar with the film to enjoy the story behind it, there are several scenes that intentionally mirror classic Godfather moments, a creatively clever touch sure to amuse fans. And while we continually suspect some of the narrative and characters are simplified, embellished and romanticized, The Offer is compulsively watchable throughout its 10 episodes. Do we believe everything is depicted exactly as it happened 50 years ago? Of course not, nor do I think we’re expected to. The Godfather’s backstory is simply a springboard for an epic tale in its own right.

FEATURETTES - “No One Can Refuse: Making The Offer”; “Meet Al Ruddy”; “Parallels: Art Imitates Art”; “The Offer: Sending a Message”; “Directing The Offer.”