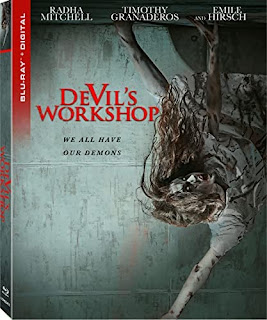 Half of Devil’s Workshop is pretty good. The other half is an endurance test, featuring a character so irritating and obnoxious that he torpedoes the whole movie.

The good half features Timothy Granaderos as Clayton, a struggling actor who’s up for a prominent role as a demonologist in an upcoming horror film. After getting a callback for another reading, he decides to go the method route and places an ad hoping to meet a real demonologist. Former reality show host Eliza (Radha Mitchell) responds, inviting him to spend the weekend at her home. Almost immediately, she begins subjecting him to mind games, manipulation and - eventually - supernatural torment. Long before Clayton figures it out, it’s obvious Eliza is more demon than demonologist.

These scenes are fairly interesting - occasionally creepy - and Mitchell is suitably intimidating as Eliza. While it’s a bit slow at times and we don’t care much about Clayton, things get pretty fun once Eliza starts unleashing her devilry.

Unfortunately, the other half is not-only terrible, it seems to belong in another movie. Emile Hirsch plays Donald, an annoyingly cocky actor vying for the same role. Most of his scenes consist of getting high, partying with a couple of bimbos and blowing his own horn. He might be the most grating character I’ve seen in a film this year. These segments add absolutely nothing to the actual plot, and worse yet, the two halves run concurrently, the narrative switching back and forth between these guys.

I dunno…maybe writer-director Chriss von Hoffman felt he didn’t have enough for a feature film and decided to pad things out. But hey, sometimes you gotta bite the bullet for the sake of your story and just make a short subject. Clayton & Eliza’s supernatural cat & mouse game would’ve made a decent one. Instead, we’re forced to spend half the time with a guy we feel like punching whenever he opens his mouth.