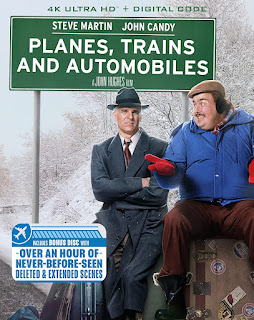 This is sort of a perplexing release from Paramount.

Though it was a respectable hit back in 1987, Planes, Trains and Automobiles has since become a perennial holiday classic. For many, the film is as much a Thanksgiving tradition as A Christmas Story is during the yuletide season, so I’m not sure why it wasn’t selected as part of the Paramount Presents series (with all the aesthetic trimmings). That should have been a no brainer.

This one features the film only on 4K, whereas recent remastered releases, such as The Man Who Shot Liberty Valance and Blue Hawaii, offered the films in both formats. And while the 4K transfer is certainly watchable, the overall image falls far short of the standards we’re used to seeing from Paramount. The sound quality is good, but not an improvement over the 10 year old Blu-ray.

It does come with a Blu-ray, but it’s essentially a bonus disc of deleted or extended scenes. However, it’s also 75 minutes long, chock full of recently discovered material and the main reason for anyone to upgrade, especially for fans. Sure, one can see why certain scenes were deleted or trimmed up, but others are quite revealing and funny. A few of them might have the viewer wondering why they were left on the cutting room floor.

Elsewhere, Planes, Trains and Automobiles remains John Hughes’ most mature film and arguably the last decent one he directed himself. But with all due respect to the late John Candy - who’s charming but doesn't really play against type - it’s Steve Martin who truly shines. In a way, the film marks sort of a turning point in his career, when he begins to demonstrate he is arguably funnier as an exasperated, beleaguered straight-man than playing broad caricatures.

One can see why it’s annually revisited by so many fans, and It’s for them that I think this release is intended. With a lengthy collection of previously unseen footage, it’s more of a love letter to a modern classic than any kind of significant technical upgrade. Videophiles needn't bother, but those who can’t get enough of the movie itself will consider this a second helping of stuffing to cap off their holiday feast.

FEATURETTES (4K) - “Getting There is Half the Fun: The Story of Planes, Trains and Automobiles”; “John Hughes: Life Moves Pretty Fast”; “John Hughes for Adults”; Tribute to John Candy.”

DELETED / EXTENDED SCENES - Running well over an hour, this collection of scenes are the main reason for fans to upgrade.