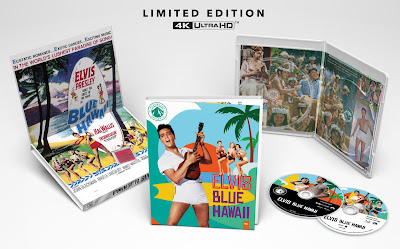 When you think about it, Elvis movies were to the 1960s what slasher horror was to the 1980s…

The slasher onslaught didn’t begin in the ‘80s. The first significant one, Halloween, was released in 1978. However, it was the following decade that established a formula which critics hated and fans embraced. That formula was milked for all it was worth until we all grew up and moved on. By the end of the decade, slasher movies were old news.

Similarly, Elvis Presley didn’t head to Hollywood in the ‘60s. He appeared in several films during the ‘50s when he was still trying to be taken seriously as an actor (those also remain his best films). But the typical “Elvis movie” as we know it flourished during the ‘60s, Blue Hawaii being one of the earliest to cement a formula that would be rehashed again and again. Like slashers, they were dismissed by critics and loved by fans…at least until they outgrew such fluff. By the end of that decade, Elvis’ movie star days were over.

Looking back, Blue Hawaii is no better or worse than anything else he cranked out during the ‘60s, though the tropical locations make it one of the prettiest, which this 4K UHD restoration brings out quite nicely. Elsewhere, the film adheres closely to the formula: The King’s congenial brand of non-acting, pretty girls, goofy sidekicks, clueless old people, lots of songs (including an admittedly great rendering of “Can’t Help Falling in Love”) and, of course, a plot thin enough for a slight breeze to blow it away.

In this case, Elvis plays Chad, a recently discharged G.I. who’d rather surf with his buddies than enter the family pineapple business, much to the chagrin of his doting, snooty mother (Angela Lansbury). This leads to some minor conflict when Chad chooses instead to be a tour guide. Even more minor conflict pops up when his girlfriend, Maile (Joan Blackman), becomes jealous as other girls vie for Chad’s affection. In between are lots of bouncy musical numbers - though not much actual rock & roll - and meandering moments to pad the already slight story.

I’m making it sound like Blue Hawaii is a bad movie. Quite the contrary, this is a prime example of the Elvis formula, which his fans wouldn’t have any other way. It might even be a personal favorite of super-fans, much like die-hards who declare Friday the 13th: The Final Chapter to be the best Jason movie (though no one else can tell the difference). Either way, this disc (#36 in the Paramount Presents series) is worth its weight in nostalgic warm fuzzies. It’s pretty light on bonus features, but the 4K transfer is great.