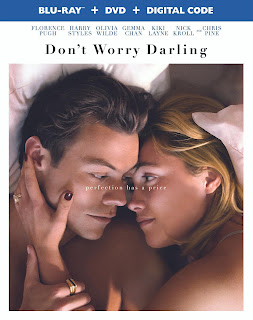 While the highly publicized behind-the-scenes turmoil surrounding Don’t Worry Darling is ultimately more intriguing, the movie isn’t completely without merit. With tempered expectations, it is an eye-pleasing way to kill a couple of hours.

Those tempered expectations should definitely apply to the derivative story. Florence Pugh plays Alice Chambers, the loyal and loving wife of Jack (Harry Styles). They live in an idyllic, ‘50-style community - called Victory - that resembles an ultra-conservative’s idea of paradise: cul-de-sacs, palm trees, immaculate homes, shiny cars and neighborhood barbecues. The men all work for the town’s founder, Frank (Chris Pine), on something called the ‘Victory Project” while their wives remain dutifully at home, cooking, cleaning and supporting their husbands.

Anyone who’s ever seen The Stepford Wives or The Truman Show will certainly know what’s coming: Victory isn’t the perfect community it seems, nor is Frank the inspirational leader he appears to be. After venturing outside of the town’s safety zone - the location of the so-called Victory Project - Alice slowly learns why (and how) all the wives are conditioned to be submissive, unquestioning and subservient. Though Frank knows she’s onto him, he convinces everyone she’s simply paranoid, and maybe a threat to the community.

So yeah, Don’t Worry Darling is a glossy update of The Stepford Wives, which isn’t necessarily a big problem. A similar theme of toxic masculinity may be a lot more heavy-handed here, but is certainly still timely in light of recent sociopolitical upheavals. But unlike Stepford, which kept the viewer guessing until its shocking finale, we suspect right away that something ain’t right in Victory. All we’re waiting for is to see how long it takes Alice to figure it out, and when she finally does, there’s still an hour left to go.

There’s some fun to be had in the meantime. The film looks great, with plenty of dreamlike imagery and beautiful production design (though the latter is also the first obvious clue we don’t trust what we’re seeing). Overall, the performances are good, especially Pugh, who carries most of the film on her shoulders, and Pine, obviously enjoying the chance to play an antagonist. As for the story itself…it holds no surprises, but until the convoluted final act - which doesn’t bear a ton of scrutiny and descends into a gratuitous chase -  the journey is sporadically interesting.

Though we suspect Rod Serling could have had the whole thing wrapped up in a tidy 30 minutes, Don’t Worry Darling is certainly watchable. If nothing else, director/co-star Olivia Wilde has put together a film that’s always aesthetically interesting, but I think most of us would happily trade some surface gloss for a surprise or two.