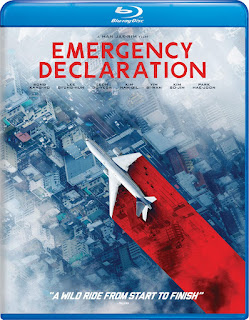 I can’t resist a good disaster movie. But to be completely honest, I can’t resist a bad one, either. Fortunately, the nerve-jangling Korean thriller, Emergency Declaration, ranks highly among the former.

Frequent fliers of airliners-in-crisis movies will find the plot irresistible. Disgruntled bio-engineer Ryu (Im Si-wan) sneaks a lethal virus (inside himself!) on-board a flight bound for Hawaii. Established as clearly psychotic right from the get-go, he chooses that flight because it’s crowded and he wants to kill as many people as possible. Sure enough, once the bug is released, passengers and crew start getting infected. Some die almost immediately, others linger for hours (depending on their importance to the story).

On the ground, Detective Gu In-ho (Song Kang-ho) not-only learns of Ryu’s plan, his wife is on the same flight, giving him a personal stake in the government’s efforts to land the plane. Unfortunately, both the United States and Japan refuse to let it enter their airspace. Through some strong-arming by Gu and the Korean minister, the company which first-created the virus reluctantly provides a vaccine, but it may no longer be effective because the bug has mutated (which means the plane might not even be allowed to return to Korea). Meanwhile, the plane is running low on fuel and its captain is incapacitated, leaving it up to PTSD-stricken ex-pilot Park (Lee Byung-hun) to save everyone.

With a concept similar to John J. Nance’s novel (and subsequent TV movie) Pandora’s Clock, Emergency Declaration is grand, epic entertainment, striking the right balance between gritty intensity and the endearing melodrama of old school disaster movies. Hence, the effects of the virus are gruesome and unnerving (not-to-mention timely) while the subplots, such as Gu’s wife or the tumultuous past shared by Park and the captain, are tropes straight out of an Airport movie (or Airplane!, for that matter).

Elsewhere, Emergency Declaration benefits from earnest performances, engaging characters - some well-developed, others deliberately broad - and plenty of suspenseful set-pieces, the highlight being a scene in which the out-of-control plane begins to roll, as seen from inside the cabin. And despite its length, the film is tons of high flying fun, seldom slowing down long enough for us to question its less plausible moments.