We All Know THE GOOD BOSS 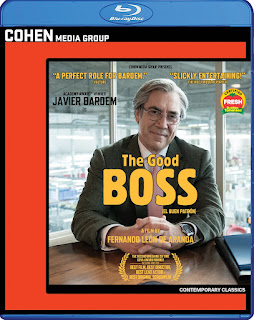 I used to work for a guy like Julio Blanco. It was at a sports equipment company in Ohio, and he would regularly boast about the factory as his home and the workers as his children. We’d generally fall for it, too. In reality, he underpaid everybody, regularly tried to bang new female employees (or the wives of his employees) and unceremoniously fired people without warning, even if they’d been loyal for years. With hindsight, it’s obvious he was only concerned with himself and his public persona, which I suppose is typical of many wealthy businessmen.

Watching Julio Blanco slowly reveal his true nature is a big part of what makes The Good Boss interesting. He’s played to perfection by Javier Bardem, who’s always been gifted at displaying a touch of menace behind a congenial exterior. As the film opens, he’s standing before his employees, singing their praises and proudly boasting that they’re the reason his company, Blanco Bascula (Blanco Scales), is a finalist to win a prestigious local business award. In the very next scene, he’s firing an employee - whom he was also screwing - by telling her to treat the termination as a journey to a new life.

Julio is obsessed with winning the award and grows concerned with anything which threatens his chances, such as a disgruntled ex-employee who’s camped outside the factory with protest signs and a bullhorn. He also meddles into the private life of right hand man and life-long friend Miralles (Manolo Solo) when his wife's infidelity affects his ability to do his job. Meanwhile, Julio seduces Liliana (Almudena Amor), a young new intern who turns out to be the daughter of family friends.

Cracks are revealed in his public facade as he uses unscrupulous, cruel and sometimes illegal methods to deal with these problems…anything to keep the company in a positive light. And like my old boss at the sports equipment factory, the more we know the real Julio, the less we like him. What’s especially fascinating is that it isn’t the character who undergoes change throughout the narrative, but the audience. Julio’s always been an asshole and it isn’t until late in the story that it’s suggested he’ll be anything else.

Until then, The Good Boss is pretty engaging. Growing to despise Julio is actually kind of fun, maybe because most of us probably know a guy like this. And if not quite the comedy the trailer makes it out to be, the film is often pretty amusing. I especially enjoyed the numerous scenes involving Ramon (Fernando Albizu), the company’s kindly-but-hapless security guard. Seemingly inconsequential to the story, he’s actually the perfect foil for Julio’s ruthlessness…and perhaps the guy we can relate to best.

2 DIFFERENT INTERVIEWS - Both with director Fernando León de Aranoa and actor Javier Bardem. One is a Zoom interview, the other is in front of a screening audience.