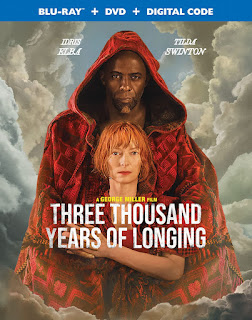 Like most George Miller films that don’t contain ‘Max’ in the title, there’s a lot to admire about Three Thousand Years of Longing and it’s worth seeing, though never quite as engaging as we think it’s going to be…even with Idris Elba going shirtless for most of the film, which certainly gets my wife’s seal of approval (yeah, thanks a lot, buddy).

Tilda Swinton is Alithea, an academic “narratologist” who, while attending a conference in Istanbul, buys an old glass bottle from a junk shop. In her hotel room, she attempts to clean it, which releases a Djinn (Elba) who’s been trapped for 3,000 years. He offers to grant Alithea three wishes. Being well-read, she’s aware that wishes always have dire consequences and is therefore suspicious. However, the Djinn has personal reasons for granting them: It’s the only way he can remain free.

The bulk of the narrative has Djinn telling Alithea about his life, beginning with his love for the Queen of Sheba that results in his imprisonment in the bottle. Over the centuries, different people find the bottle and release him, but for various (sometimes tragic) reasons, they don’t complete their wishes and he remains captive. In the interim, Alithea shares her own story, a life that has been solitary and loveless, which eventually prompts her first wish…for the Djinn to love her like some of the people from his past.

Again, there’s a lot to enjoy here. Swinton and Elba are excellent in what’s essentially a two-character story. The latter, in particular, instills Djinn with the right measures of vulnerability and hunkiness. Additionally, the film looks gorgeous, a colorful triumph of production design, atmosphere and imaginative special effects. Taken individually, the Djinn’s stories are also fairly captivating, if somewhat aloof.

The film begins to stumble during the underwhelming final act, which focuses primarily on the present relationship between Alithea and the Djinn, who are far more interesting individually than they are together. Following the visually compelling flashback stories, these scenes feel anticlimactic, to say nothing of unnecessarily protracted. The numerous false endings ultimately make the movie feel longer than it really is.

Still, George Miller has never made a truly bad movie and once-again demonstrates he's a master craftsman. We’re never as emotionally invested in its main characters as we should be, but when viewed as sort of an anthology film, Three Thousand Years of Longing delivers more hits than misses. And if nothing else, it's a scintillating slab of Idris eye candy for my missus.