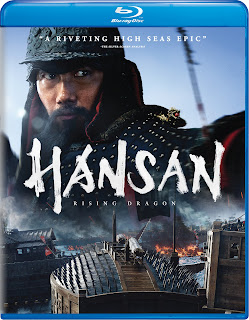 Who says war is hell? Sometimes it’s a good thing. After all, it certainly saves this movie.

Hansan: Rising Dragon is a prequel to The Admiral: Roaring Currents, which I haven’t seen. But rest assured, other than depicting another massive 16th Century naval battle led by legendary Joseon commander Yi Sun-sin (Park Hae-il), it’s pretty much its own film. This time it’s the Battle of Hansan, pitting Yi Sun-sin and his navy against a much bigger Japanese fleet led by Admiral Wakisaka (Byun Yo-han).

Though out-gunned, Sun-sin has a few tricks up his sleeve, such a gigantic, boat-ramming destroyer called Bokkaisen, which resembles an unholy cross between Nintendo's Bowser and a humpback whale. It's also capable of cutting through ships like butter. But even though we hear a lot of characters talk about the “turtle ship,” it’s a long time before we actually see it in action. Until then, Hansan: Rising Dragon is slow, confusing and relentlessly talky for well over an hour, with both sides planning the upcoming naval campaign in terms we sometimes understand, other times we don’t.

Though visually appealing, the film struggles to maintain interest because there is absolutely no attempt to create memorable or engaging characters (and there's way too many to keep track of). All we know about them are their names and titles, conveniently displayed on-screen when they make their first appearance. The only reason we realize Sun-sin is the protagonist is because Wakisaka is cockier and willing to slaughter his own underlings. More than once, we find ourselves wondering if the final conflict we keep hearing about is gonna be worth enduring all this.

However, our patience is rewarded when the Battle of Hansan finally ensues. Running at least 45 minutes, it’s epic in scope, brilliantly edited and truly thrilling, punctuated with excellent special effects and a ton of fiery maritime destruction. And just when the battle threatens to become rote, "Bowser" arrives to crank up the mayhem. While I serious doubt a galley of slaves would be capable of rowing hard enough to achieve the speed this ship does, watching it smash enemy boats into kindling is a blast.

True story or not, a great war movie has dramatic oomph, not just dozens of talking heads spouting strategic jargon. Still, the final battle ultimately saves Hansan: Rising Dragon from being a total exercise in tedium. Director/co-writer Kim Han-min, along with his team of editors & FX wizards, manages to rescue the film just in the nick of time.

FEATURETTES - “Character Highlights”; “Secrets of Make-up”; “Staff Commentary” (which is actually a bunch of interviews, not an audio commentary).