THE WITCH 2: THE OTHER ONE Dishes Up More Teenage Mayhem 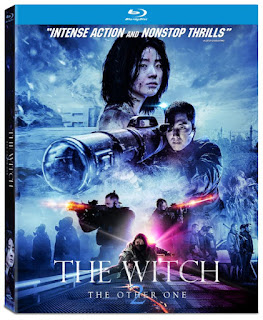 2018’s The Witch: Subversion was a Korean sci-fi-action film about a gifted teenage girl, Ja-yoon (Kim Da-mi), who’s been bio-engineered to be a super-assassin by a shady organization, which of course bites them in the ass when she escapes and later returns for revenge. While not particularly original, it was fun, fast-moving, extraordinarily violent and sometimes surprisingly touching, with a likably engaging protagonist. Though it worked just fine as a stand-alone film, it was always planned as a franchise and the door was left wide open for her story to continue.

But in The Witch 2: The Other One, Ja-yoon’s story does not continue. Not directly, anyway. She’s mentioned on occasion and shows up briefly at one point, but other than that, this is a new story with a new “witch” (simply known as ‘Ark 1’ and played by Shin Si-ah). She escapes from another facility and is taken in by a woman, Kyung-hee (Park Eun-bin), after both of them escape local gangster Yong-doo (Jin Goo). Despite his entire crew getting their asses handed to them by ‘Ark 1,’ Yong-doo later confronts them at Kyung-hee’s ranch because he wants the property. It’s sort of a superfluous subplot, mostly to provide more cannon fodder during the climax.

Meanwhile, everyone’s on the hunt for ‘Ark 1’...all of whom apparently have the same bio-engineered superpowers. Not only does that mean they’re damn-near unkillable, some are able to zip through the sky like Neo from The Matrix. This leads to numerous clashes that are certainly flashy - not to mention bloody - but so over-the-top and CGI-heavy that they aren’t nearly as thrilling as those from the first film.

From a character standpoint, tough, hard-drinking agent Jo-hyeon (Seo Eun-soo) is fun, as is her beleaguered sidekick (Justin John Harvey), who provides most of the comic relief. But compared to Ja-yoon in The Witch: Subversion, ‘Ark 1’ is a static, bland main character. Aside from a few charming ‘fish-out-of-water’ moments, she develops no personality or traits beyond an ability to inflict damage.

But despite lacking much heart and being over-stuffed with special effects that call too much attention to themselves, The Witch 2: The Other One remains watchable. As he did with the first film, writer-director Park Hoon-jung maintains a lively pace with plenty of action and gobs of uninhibited carnage. And of course, the last scene lays the groundwork for another sequel. Here’s hoping Ja-yoon is featured more prominently next time.