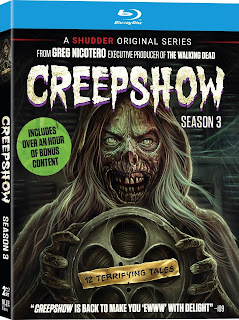 If you enjoyed the first two seasons, you’ll likely get a kick out of Season Three. Creepshow may not be the greatest anthology series ever made, but it’s certainly one of the most consistent, still maintaining the look, spirit and wicked humor of the original film. My only ongoing complaint: I wish each season consisted of more episodes.

As usual, each episode features two stories of just desserts by various writers and directors. Not every tale hits it out of the park, but there aren’t any total pooches, either. Even some amusing social commentary can be found on occasion, such as “Meter Reader,” depicting a worldwide pandemic, only instead of COVID, the infected are demonically possessed. Then there’s “Mums,” where redneck insurrectionists get what’s coming to them, while “Drug Traffic” (featuring Michael Rooker) has a sleazy congressman exploiting the suffering of the poor for political gain.

Other standout episodes include “Skeletons in the Closet,” a funny homage to countless classic horror films that cleverly incorporates iconic scenes and dialogue into the story. “Okay, I’ll Bite” features a nebbish convicted pharmacist whose obsession with spiders helps him strike back at his tormentors. "Queen Bee" is probably the grossest of the batch, with three teenage fans going to great lengths to catch a glimpse of their idol and getting more than they bargained for. Elsewhere, “The Things in Oakwood’s Past” is an animated episode, though somewhat predictable, while “The Last Tsuburaya” has an interesting story, but is hampered by an unconvincing monster.

For the most part, though, Season 3 is another winner, with the same colorful production design, animated transitions, vivid violence and black humor that have been Creepshow hallmarks since 1982. And as usual, there are so many Easter Eggs peppered throughout the series that it’s impossible to catch ‘em all the first time. What’s not to love?