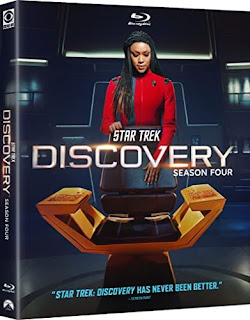 Those of a certain age might recall the days of the original Star Trek series, which tackled themes and content not generally associated with sci-fi television. Creator Gene Roddenberry was nothing if not forward-thinking, showing a future where humankind has advanced beyond the ridiculous trifles that make existence miserable. One episode famously featured the first interracial kiss (between Capt. Kirk and Lt. Uhura). I don't think this was intended to be provocative or controversial; the scene simply required it.

In that respect, I think Mr. Roddenberry would be proud of what his beloved franchise has evolved into. Granted, I haven't seen everything out there, but after four seasons, Star Trek: Discovery feels like the most diverse and inclusive series on television. People of just about every race - terrestrial or otherwise - are featured in prominent roles, as are those who identify as gay, trans and non-binary. More importantly, the race or gender of particular characters is never relevant to the plot of any episode. By the 32nd Century, no one cares how you identify.

While that might have the Bible-thumping MAGA hat crowd quaking in their boots, I find that pretty cool. Besides, with galactic Armageddon to deal with - the story arc of these 13 episodes - who the hell has time to worry about such things?

In Season Four, a massive space anomaly - five light-years wide - is laying waste to entire civilizations. Not only is it apparently indestructible, but it can also suddenly disappear and reappear elsewhere without warning. Worse yet, Captain Michael Burnham (Sonequa Martin-Green) and her Discovery crew have determined the anomaly by an unknown species from another galaxy. In the Star Trek canon, there’s never been a threat this big and destructive, and when focused on dealing with the threat - whether learning its origins, attempting first-contact or trying to destroy it - Season Four is compelling and bingeworthy, especially the final six episodes.

However, it takes a while to gain some momentum. Even more so than last season, subplots involving relationships, personal crises and characters ‘finding’ themselves get a little repetitive. There are more inspirational speeches, encouraging pep talks and personal epiphanies than there are stars in the galaxy they’re trying to save. While the foundations of Star Trek are built on strong character relationships, most of these moments - charming as they may be - simply aren’t as interesting as the looming apocalyptic crisis.

On the other hand, other viewers will relish those asides as the best aspects of Season Four. Characters and their quirks are part of what has always made Star Trek unique, and as such, every character - new and recurring - has ample moments in the spotlight. Whatever the case, this season is another good one. Going where no one in any previous series has gone before - narratively and literally, as it turns out - this is a Star Trek for everyone.