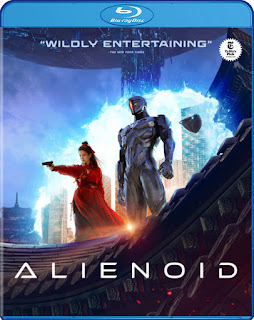 If India’s RRR is 2022’s most wonderfully bonkers megamovie, then Korea’s Alienoid runs a close second. Not quite as wonderful, not quite as bonkers, but definitely the work of madmen who decided to throw everything at the wall to see what sticks. And they were apparently confident much of it would because this is only Part One of a two-part story.

Alienoid is a crazy mash-up of science-fiction, fantasy, action, disaster movie, comedy, historical fiction, Taoism, martial arts and family drama, all tossed in a blender for a smoothie consisting of familiar ingredients, but is generally pretty satisfying. Perhaps topping it with a couple of crazy musical numbers would’ve added a bit more flavor

The narrative unfolds as two seemingly unrelated threads, with an opening time travel sequence providing the only link. Presently, Guard and Thunder are shapeshifting alien robots who imprison their planet’s criminals in the unaware bodies of human beings. They’re also taking care of Ahn, a 10-year-old they rescued from the 14th Century. Some of the prisoners manage to escape their human hosts to wreak havoc while trying to find the man hosting their leader, The Controller. Guard and Thunder must stop them before they unleash Haava, floating balls of their home planet’s atmosphere, which is deadly to humans.

Meanwhile in the 14th Century, Muruk is a bounty-hunting swordsman trying to steal The Crystal Knife, which carries a substantial reward. He’s aided by two cats which can transform into human servants/fighters. To get close to the knife, he poses as a bridegroom, not knowing that she’s also an imposter seeking the knife. Armed with 21st century weapons, that woman turns out to be Ahn, the little girl from the other timeline. Additionally, the masked man who possesses the knife, Ja-jang, is also an alien and aided by two conniving sorcerers.

Both storylines eventually converge, allowing the viewer to make some sense out of the insanity. But until then, Alienoid is often pretty perplexing, but if one doesn’t try to think about it too hard and just let everything happen, the film is pretty entertaining (if a bit overlong). There’s gobs of over-the-top action in the form of swordplay, close-quarters fighting, magic, gravity-defying stunts, chases, time jumps, robot rampage, a talking SUV and a jawdropping scene of citywide destruction. The special effects aren’t always convincing, but certainly fun to watch.

And this is only Part One. While there is some closure to the story, major plot threads are left unresolved. A glimpse of what to expect in Part Two is teased during an end-credits sequence, but be prepared to be left hanging. Whether or not Alienoid’s story and characters justify two movies is debatable, but while in the moment, it’s enjoyably bonkers sci-fi.