ATTACK OF THE 50 FT. WOMAN: Too Much Talking, Not Enough Attacking 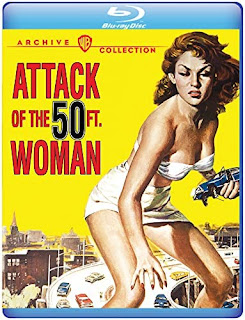 Culturally, Attack of the 50 Ft. Woman has probably gotten more mileage out of its title than the film itself. Sure, the special effects are wonderfully ludicrous and the final line uttered by Dr. Cushing - “She finally got Harry all to herself” - is classic, but elsewhere, the film is seldom as much cheeky fun as the title suggests.

For most of the brief running time, it’s actually pretty slow. A majority of the first act consists of unstable, alcoholic heiress Nancy (Allison Hayes) being gaslit by her philandering husband, Harry (William Hudson). When he’s not trying to have her committed - so he can get his mitts on her millions - Harry’s kanoodling with local hussy Honey (Yvette Vickers). But when Nancy becomes irradiated by an alien satellite and grows into a giant, she goes on the hunt for her wayward husband.

The final act is amusing, mostly because of the special effects and dialogue, but it feels like forever before Nancy’s finally unleashed. Until then, the film is kind of tedious, with a lot of dull scenes that feel like attempts to pad it out to feature length. With hindsight, it’s obvious why the climax is all anyone remembers, though the overall performances by the b-list cast are actually pretty good.

This Blu-ray transfer is pretty good, too, as is the lone bonus feature, a charming audio commentary that includes the late Ms. Vickers. But despite the considerable cultural impact of its concept and campy title, Attack of the 50 Ft. Woman suffers from too much talking, not enough attacking.