THE AMBUSH: Black Truck Down 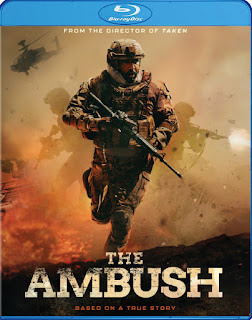 Based on a 2018 incident that happened in Yemen during an insurgency by militant rebels, The Ambush has a plot and aesthetic similar to Black Hawk Down. Like Ridley Scott’s film, this one tends to eschew characterization in favor of chaotic, visceral action.

During the Yemen War, a squad of Arab soldiers are on a routine mission to deliver supplies to nearby locals. While driving through a canyon, their two vehicles are attacked by heavily armed militia. Trapped and surrounded, the soldiers inside the trucks - some seriously injured - must defend themselves until additional troops arrive. However, their rescuers get shot-up and stuck, too. So does most of the third group, and despite gunning-down dozens of rebels (with additional help from aerial strikes), the enemy keeps coming.

There are some token attempts at characterization during the first act - mostly Sergeant Ali (Marwan Abdulla Saleh) - but once it becomes clear that there are no main characters, The Ambush focuses almost exclusively on the conflict, which is intense, bloody and very well executed. Despite not revealing much about these soldiers or the rebels they’re fighting, director Pierre Morel creates a lot of tension, aided in no small part by excellent editing and camerawork, as well as an urgent score by Henry Gregson-Williams.

Though the narrative generally refrains from delving too much into the politics of the war itself, these rebels are more or less depicted as ruthless terrorists. Whether or not that’s accurate is for more-informed folks to argue. For those who don’t watch films for a history lesson, The Ambush tells an exciting, fast-paced story of good guys vs. bad guys.