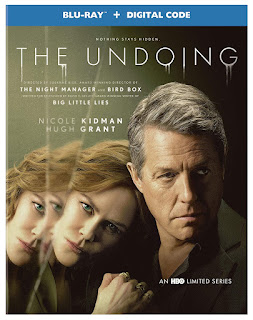 Jonathan Fraser is arguably the role Hugh Grant was born to play.

There’s a small part of his image which suggests he’s sort of a cad. By that, I mean he tends to infuse many of his characters - even the romantic leads - with subtle hints that those repressed mannerisms are a front and we shouldn’t completely trust them. By design or not, Grant exploits his image to-the-hilt in The Undoing, with a character whose mask conceals a dark soul, even from those closest to him. Maybe this is Hugh's way of finally purging that persona.

He’s easily the best part of this six-part limited series, which first aired on HBO last year. On the surface, it doesn’t seem like he’s really stretching himself. Outwardly, there isn’t a monumental difference between Jonathan Fraser and Daniel Cleaver, his character from Bridget Jones’s Diary. But when he’s accused of brutally murdering a young woman, cracks in the armor reveal a truly repugnant man. He still clings to his charming facade, though it now reeks of insincerity. Whether or not he is guilty of murder, we really grow to hate thIs guy.

Jonathan is an oncologist specializing in treating children with cancer while his wife, Grace (Nicole Kidman), is a successful psychologist. Their teenage son, Henry (Noah Jupe) goes to a prestigious private school that’s partially supported by high-end auctions run by a parent group (which Grace is part of). On the night of an auction, the newest member of the group, Elena (Matilda De Angelis) is bludgeoned to death in her art studio. Soon after, Jonathan disappears, supposedly to speak at a conference.

However, there is no conference and Jonathan was fired from his hospital months ago. We later learn that, not only did he know Elena - treating her older son for cancer - they were having an affair and he’s the father of her baby daughter. Now the primary suspect, he’s eventually apprehended, turned-in by Grace when he shows up at their beach house. The ongoing investigation and subsequent trial become a media circus that disrupts everyone’s life, including Franklin Reinhardt's (Donald Sutherland), Grace’s wealthy father who posts Jonathan’s bail even though he suspects the man is guilty.

While the narrative sometimes unfolds like a traditional mystery - briefly suggesting a few other suspects, including Grace - the question of Jonathan’s guilt often takes a backseat to possible reasons why he probably is. Although he’s destroyed their seemingly idyllic marriage, she still doesn’t believe he’s capable of murder. Jonathan, on the other hand, seems to think winning the trial will somehow mean he and his family will instantly put it all behind them...as if the affair, his lies and the murder never happened.

For the most part, it’s a compelling story, filled with well-timed revelations which take it in some unexpected directions. Most of the characters are well-realized and performed. As Grace, Kidman earns our empathy, even when her character makes some questionable decisions regarding her deteriorating relationship with Jonathan. Sutherland is also impressive, as usual, giving Reinhardt a touch of menace when protecting his daughter and grandson. But it’s definitely Grant’s show...and the more we know him, the more despicable he seems, especially since he’s still convinced he can charm his way back into his family’s good graces..

Gorgeously filmed and aesthetically cinematic - with great use of New York locations - my main quip might be the overall length. Each episode features just enough important turns to keep us engaged, especially episodes 2 & 3. However, there are moments that don’t always seem necessary, such as Grace’s numerous, inexplicably aggressive interrogations by a couple of callous cops. Additionally, the recurring subplot of Henry’s problems at school really only needed to be addressed once. Ultimately, this probably could have been trimmed by an hour without sacrificing anything really vital.

Or maybe the goal was to retain every aspect of the original novel, You Should Have Known. Though I haven’t read it, I walked away with the impression The Undoing followed it to the letter. At any rate, this miniseries is mostly pretty engaging, each episode concluding with a cliffhanger that compels us to keep going.

THE UNDOING REVELATIONS - Spread-out over both discs, these 11 promotional featurettes run 2-3 minutes each, focusing on all the major characters, as well as the climactic bridge scene.

“NICOLE KIDMAN AND HUGH GRANT INTRODUCE THE UNDOING” - The two stars appear to get along better than their characters do.