ICE COLD IN ALEX and the Tall Cool One 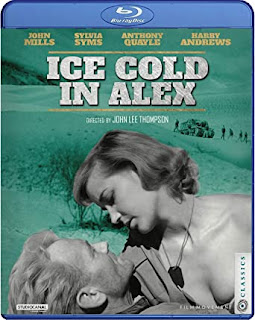 I gave up drinking years ago. While I don’t miss it all that much, there are still occasions when I’m hit by the overwhelming urge to crack open a cold one, generally after a well-timed commercial or particularly-effective movie scene to remind me of what I’m missing.

Without offering spoilers, I gotta say there’s a contextual scene in Ice Cold in Alex that makes a simple glass of lager look like the greatest gift God ever bestowed upon mankind. With all due respect to Cape Fear and The Guns of Navarone, it might be the coolest scene director J. Lee Thompson ever shot. Damn him for making me nearly fall off the wagon.

That tall glass of icy ambrosia isn’t a throwaway moment, either. It’s relevant to the narrative, as well as the film’s awkward title. In Africa during World War II, weary, alcoholic Captain Anson (John Mills), Sergeant-Major Tom Pugh (Harry Andrews) and two nurses are forced to drive an Ambulance across a massive, treacherous desert while avoiding German troops. Along the way, they acquire another passenger, Captain van der Poel (Anthony Quayle), who they soon suspect is a Nazi spy. However, Poel is also responsible for saving their lives more than once, so they’re reluctant to confront him.

The group must overcome many obstacles...enemy troops, heat, quicksand, dwindling supplies and their increasingly cranky truck, nicknamed Katy. The journey is sometimes gripping, with a few sequences which might even draw favorable comparisons to The Wages of Fear - such as the tension-filled ascent up a treacherous dune. Thompson and cinematographer Gilbert Taylor do a good job making the desert look endless, bleak and foreboding (starkly contrasting the beautiful bubbly brewski waiting at the end of the journey).

But there are several stretches which aren’t very engaging, mostly when it focuses on the characters themselves. The performances are fine, but other than Anson’s drinking problem, we don’t learn enough about these people to become very invested. Additionally, the romantic subplot between Anson and Nurse Diana (Sylvia Sims) feels contrived (and considering the obvious age difference between the two, kind-of creepy).

Sometimes meandering and a bit overlong, Ice Cold in Alex doesn’t rank among the best British war films from the same era, but its technical merits are solid and there are just enough genuinely suspenseful moments to make the pokier parts worth enduring (any film that confirms our worst childhood fears about quicksand can’t be all bad). And when all is said and done, don’t be surprised to find yourself reaching for a cold one, too.

STEVE CHIBNALL ON J. LEE THOMPSON - A profile about the director, mostly focusing on this film.

INTERVIEWS WITH SYLVIA SIMS - The best of the bonus features, this is a charming Q&A with the actress who played Diana.

INTERVIEW WITH MELANIE WILLIAMS - A discussion about the film.

“A VERY BRITISH WAR MOVIE” - An vintage extended clip from the making-of documentary.