THE DAY OF THE BEAST: Horror, Humor and Heavy Metal 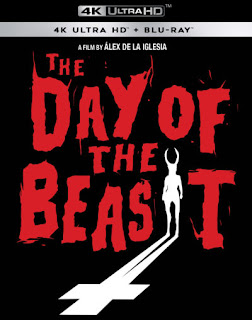 Among the coolest things about this gig is discovering overlooked gems that somehow escaped my radar, or directors who display a flair worth exploring further. Regarding the 1995 Spanish horror film, The Day of the Beast, both perks apply.

One thing is certain...I’ve never seen a movie quite like this, in any genre, let-alone horror. Director/co-writer Álex de la Iglesia could have easily taken his premise down a familiar path and would still have a decent film on his hands. He displays a unique visual style that’s both gritty and surreal. Additionally, he’s a good screenwriter and coaxes better performances from his cast than most films or this type usually get (or deserve).

However, The Day of the Beast also happens to be funny as hell..on purpose. Some of the humor stems from Iglesia’s sheer audacity, uninhibited by the genre’s unwritten rules or the boundaries of good taste. For the most part, he’s willing to step right up to the line of common decency without really crossing it (though personally, I could have done without the rabbit scene). But in addition to the gonzo violence and pitch-black humor, there’s a bevy of hilarious dialogue and absurd comedy that sometimes approaches the level of farce (without ever turning stupid). What makes the film such a kick-in-the-ass is how seamlessly Iglesia brings these elements together.

The basic plot concerns an unhinged priest, Father Angel (Alex Angulo), who believes he has mathematically figured out when and where the Antichrist will arrive: Midnight on Christmas Eve, in Madrid. His batshit solution is to commit as many sins as possible in order to damn his own soul, confront Satan and prevent the apocalypse. The film’s opening montage sets the tone right away, where Angel is committing a variety of atrocities on his way to Madrid, some phenomenally cruel, that have us laughing in spite of ourselves.

Angel manages to enlist the help of dimwitted record store employee Jose (Santiago Segura), a metalhead and self-proclaimed Satanist. Then the two of them break into the home of Professor Coven (Armando De Razza), the popular host of a phony occult TV show, and force him to assist in a ritual that will summon the Devil. That “ritual” is another comic highpoint; since these guys don’t have everything ritual requires, they substitute with what’s on-hand, such as Jose’s supply of LSD instead of hallucinogenic mushrooms. It also turns out Angel must go out and find himself a sacrificial virgin, since Coven’s hot, ditzy girlfriend, Susana (Maria Grazia Cucinotta) decidedly isn’t one.

These guys make an amusing - if somewhat inept - team of demon hunters and their race to find the Antichrist before midnight is as funny as it is suspenseful. Another particularly interesting aspect about the film is - like The Omen - you could easily argue that there’s actually nothing supernatural going on. Angel may simply be a delusional loon who manages to convince two others to join his unholy quest. Even the scenes where they see the devil himself can conceivably be attributed to the acid they ingested. Such an argument definitely warrants watching the film at-least twice.

Fast-moving, ferociously-violent and often hilarious, The Day of the Beast ain’t for everybody, but it’s easy to see why it has a fervent cult following. For newcomers like myself, the film is a great discovery and I look forward to checking-out some of Álex de la Iglesia’s other work. Severin Films has put together a great home video release that fans will surely get a kick out of. In addition to a decent transfer, the disc is loaded with interesting bonus features, the best being a feature-length documentary.

“HEIRS OF THE BEAST” - A great feature-length doc, not only about this film, but the emergence of Spanish horror during a time when the genre was largely disregarded.

“THE MAN WHO SAVED THE WORLD” - Interview with actor Armando de Razza.

“BEAUTY AND THE BEAST” - Interview with Maria Grazia Cucinotta (a beauty indeed).

TRAILERS (also on the 4K disc)

4K UHD & BLU-RAY COPIES (most of the bonus features are on the Blu-ray only).