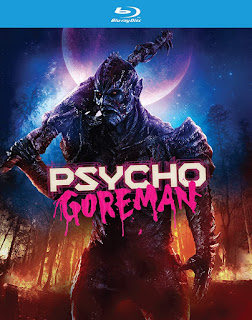 Can you manufacture a cult following?

That seems to be writer-director Steven Kostanski’s plan, with a calculated attempt to trade-in on ‘90s nostalgia (a term I’m still trying to wrap my head around). PG: Psycho Goreman is directly aimed at those raised on Power Rangers, “splatstick” comedy and Mortal Kombat-style fighting games. Many of the prerequisite boxes are checked-off: goofy premise, irreverent dialogue, exaggerated gore, deliberately cartoony characters.

Any remaining doubt over the film’s cult aspirations need-only check-out the merch catalogue that comes with this disc. With a variety of goofy products - from action figures to punching bags - I initially thought it was a joke (the “Hunky Boy” meal coupon expires the day after the Blu-ray street date). Still, plasticmeatball.com is an actual website that apparently plans on selling all this stuff (though as of this writing, none of it is available).

The movie itself is about young siblings, Mimi and Luke, who unearth an imprisoned alien warlord hellbent on universal Armageddon. Unfortunately for him, Mimi has the amulet that forces him to obey all her commands. Though he malevolently introduces himself as the “Arch Duke of Nightmares,” the kids prefer Psycho Goreman (PG for short). Much of the humor comes from PG being compelled to watch TV, try on clothes, eat fast food and play “crazy ball,” when all he really wants to do is annihilate all life in the universe. Meanwhile, Pandora, the cold-blooded leader of a race known as the Templars (who imprisoned PG in the first place) heads to earth to kill him once and for all.

So...is PG: Psycho Goreman destined for cult status? Maybe. The film is frequently very funny, especially PG’s ongoing exasperation over doing Mimi’s bidding while inadvertently endearing himself to the family (even though he’d still rather kill them). The film also maintains a retro aesthetic its intended audience will probably appreciate. Considering its limited budget, the visuals, creatures, production design and gory make-up effects are pretty impressive. But a little of this goes a long way. Like a good joke that grows less funny the more you hear it, the comic possibilities of the premise have mostly played themselves out by the time we get to the final act. I also gotta say that the main protagonist, Mimi, is thoroughly obnoxious and unlikable.

There’s no questioning that Kostanski’s heart is in the right place. Whether or not it actually becomes a cult classic, there’s a sincerity to the film that’s oddly endearing. But ultimately, PG: Psycho Goreman’s retro-hip sensibilities might be best-appreciated by those whose formative years were during the same decade it lovingly emulates.