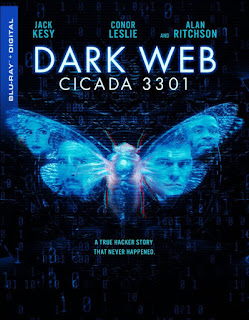 This is sort-of like a high-tech Da Vinci Code, only interesting. And funny.

Cicada 3301 is actually a real-life organization, which I didn’t know prior to watching this. Nobody knows exactly who they are or what their purpose is, but they’re responsible for putting elaborate puzzles on the internet, supposedly to test potential recruits. One character in Dark Web: Cicada 3301 suggests they could be like an IT version of the illuminati.

As presented in Dark Web, they also might have a nefarious agenda. Jack Kesy plays Connor, a down-on-his-luck hacker who stumbles upon Cicada and manages to solve one of its complex puzzles, which reveals a clue to the next one. A local librarian, Gwen (Conor Leslie) is also interested in Cicada. Together - along with Connor’s beleaguered best friend, Avi (Ron Funches) - they begin following the tech-trail. However, the NSA sees Cicada as a national threat and essentially forces Connor to try and infiltrate the organization.

This is all told in flashback by Connor, who has since-been arrested by the NSA and is now testifying in court. The narrative is complex and fairly intriguing, as are the clues which lead the trio on a high-tech scavenger hunt. With Cicada operatives and the NSA watching his every move, the “game” soon grows dangerous.

What’s unexpected is how damn funny the film is. You wouldn’t know it from the Blu-ray cover or even the trailer, but Dark Web is just-as-much a comedy as it is a thriller, with clever banter and amusing characters, especially Andreas Apergis & writer-director Alan Ritchson as a couple of bumbling NSA agents. Their antagonistic relationship with Connor provides some of the biggest laughs, such as when Connor embellishes his testimony with raunchy details about them.

I suppose some viewers expecting a straightforward thriller might find the abundance of humor off-putting. Personally, I found it to be an unexpected breath of fresh air. Dark Web: Cicada 3301 may not be quite as “dark” as the title and promotional material suggest, but it still dishes out plenty of intrigue and action to go with the laughs. If only Robert Langdon had a similar sense of humor.

I would recommend my profile is important to me, I invite you to discuss this topic... dark web