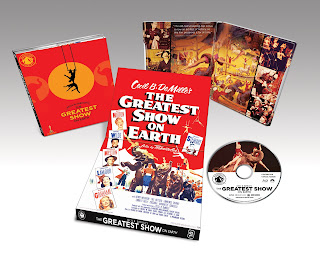 It wouldn’t be fair to say The Greatest Show on Earth hasn’t aged well. The film has always been grandiose, flamboyant and just a little bit corny. One need only hear director Cecil B. DeMille’s voice-over narration to know that. He delivers it with the same adjective-laden histrionics he’d later apply in The Ten Commandments, like the fate of humankind depends on a trainload of circus performers.

And yeah, it’s a crime against humanity that it won the Oscar for Best Picture over the likes of High Noon and The Quiet Man. But really, the Academy has made bigger blunders before and since. Besides, DeMille never operated under the pretense of creating high art. He was a master showman, his films crafted more through audacity than artistic vision. In another life, he would have been right-at-home as ringmaster in the very circus depicted in The Greatest Show on Earth.

Like such similarly-spectacular soap operas as Airport and Grand Prix, the film is shamelessly manipulative fun, with vivid imagery, colorful characters and the kind of melodrama one almost hates to admit they find engaging. Seeing it for the first time since I was a kid was an interesting experience. It’s still entertaining and the climactic train crash remains one of the greatest action sequences DeMille ever created, but I also had a few new takeaways.

First, The Greatest Show on Earth might be one of the earliest examples of extreme product placement, a two-and-a-half hour advertisement of the Ringling Bros and Barnum & Bailey Circus. Obviously produced with the company’s complete cooperation, there are several lengthy sequences where the story and main characters are shoved aside for clown cars, parades and animal tricks culled from the actual circus itself. Second, trapeze artist Holly - torn between manager Brad Braden (Charlton Heston) and The Great Sebastian (Cornel Wilde) - might be one of the most insufferable leading ladies in a film of this scope and Betty Hutton overacts wildly in the role. Personally, I think co-star Gloria Grahame would have made a more engaging love interest. Finally, the most intriguing character, Buttons the Clown, also has the least amount of screen time. As played by Jimmy Stewart (who never removes his make-up), Buttons is likable and empathetic, yet hides a dark past that we learn little about until the end. His story alone would have made a great film.

Oscar wins notwithstanding, The Greatest Show on Earth has never been mistaken for a masterpiece, but it’s pure DeMille and still a lot of fun. That it was also the biggest film of 1952 (by a wide margin) makes it an obvious choice for inclusion in the Paramount Presents series. Available on Blu-ray for the first time, there ain’t much bonus material, but the film has been beautifully restored and the packaging - featuring both minimalist and vintage artwork - is my favorite of the series so far.