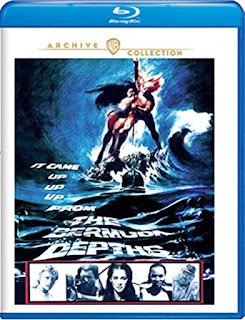 Ever have one of those moments when you vaguely recall a scene from a movie or TV show, but for the life of you, can’t remember the title or even what it was about?

For me, one such scene was of a sea monster towing a dead guy who got snared in his own harpoon tether while trying to bring the animal down. I always pictured it as a giant turtle, but the memory is a funny thing and a turtle is a ridiculous idea for a movie monster. Surely I was remembering it wrong.

But it turns out I wasn’t wrong!

After four decades of “dammit, what was that movie?”, this new Warner Archive Blu-ray scratched that itch. Originally produced for ABC in 1978, The Bermuda Depths is indeed about a titanic turtle lurking off the Bermuda coast. I’m also happy to report that, even though the premise is just as silly as it sounds, the movie is a nostalgic blast for anybody raised on the likes of Killdozer, Trilogy of Terror and scores of other pint-sized epics ABC cranked out during their Movie of the Week years.

Then there’s the added bonus of pre-Rocky Carl Weathers strutting around in shorty-shorts and developing Ahab-like tendencies, as well Burl Ives hamming-it-up before ultimately becoming turtle fodder. The movie needs them, too, because the actual star, Leigh McCloskey (who you might remember from absolutely nothing) can’t act his way out of a paper bag. This is also Connie Sellecca’s first big role, playing a sea siren who has a supernatural connection to the turtle and has been wooing Magnus (McClosky) since he was a kid.

That romantic subplot is pretty boring, as are interminable scenes of Magnus coming to terms with a traumatic childhood, when his dad died while trying to prove the turtle’s existence. But once Eric (Weathers) drags Magnus onto the high seas for some snapper-slaying, The Bermuda Depths is a goofy good time. The lively final act is highly reminiscent of Jaws, with silly special effects and marvelous miniatures. But the piéce de résistance is the film’s constant tone, which is 100% serious.

Being an inarguable product of its time, the humble pleasures of The Bermuda Depths will probably be lost on anyone under 40. But for those of a certain age, watching it today is almost like digging around in your parents’ attic and rediscovering old toys you mostly forgot about. It’s human nature to put away childish things as we get older, but it’s still a kick to drag ‘em out once in a while.

1.85:1 VERSION - This is the aspect ratio of the theatrical version, which was released in Japan.