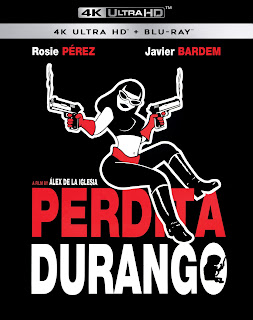 Perdita Durango is for anyone who thinks Oliver Stone displayed too much restraint with Natural Born Killers.

The titular character (Rosie Perez) is on her way to Mexico with her sister’s ashes when she meets Romeo Dolorosa (Javier Bardem), who is carting around a body of his own. In addition to robbing banks and dealing drugs, Romeo has a side gig posing as a Santeria priest and duping Mexican locals out of their money by performing cannibalistic sacrificial rituals (hence the corpse in his backseat).

When Las Vegas gangster Santos (Don Stroud) offers Romeo a job transporting a semi-truck of human fetuses for the purpose of turning them into cosmetics, he enthusiastically accepts. Before that, however, Perdita talks him into kidnapping and killing a random American stranger. They snatch two yuppies - Dwayne (Harley Cross) and girlfriend Estelle (Aimee Graham) - raping both on the way to the next “ritual” (though neither kid appears to hate the experience). They decide to sacrifice Estelle while Dwayne watches, but are interrupted by the arrival of thugs who work for the mobster Romeo owes money to.

Obsessed DEA Agent Willie Dumas (James Gandolfini) is on their trail, forced to rely on the help of a bumbling local sheriff and his even dumber deputy. Dumas (dumbass?) also keeps getting the shit beat out of him, by cars and a hired killer (one of the film’s more amusing running gags). Meanwhile, Dwane and Estelle are (sort-of) forced by Romeo to come with them to Vegas, but because of a fuck-up while taking the truck carrying the fetuses - exacerbated by Dumas - Santos now wants Romeo dead.

That’s the simple plot summary for a film loaded with bloody action, shoot-outs, drug use, decadence, violent sex and all sorts of depravity, a majority of it instigated by the protagonists. Unhinged and apathetic toward everyone but each other, Perdita and Romeo are a vicious couple who make Mickey & Mallory look like Frog and the Bandit. Having just reviewed director Álex de la Iglesia’s previous film, The Day of the Beast, I had some idea what to expect: an outrageous plot, pitch-black humor and moments which push the envelope of good taste.

But what separates Perdita Durango from pure exploitation - or Natural Born Killers, for that matter - is Iglesia’s visual style, narrative skill and emphasis on his characters. We don’t necessarily like Perdita and Romeo or approve of their actions, but they are an interesting people, and not solely because of their violent dispositions. Each has subtle nuances that - however briefly - might occasionally earn our empathy. And there’s certainly no questioning Perez and Bardem’s dedication, delivering uninhibited performances while still maintaining a small bit of humanity. Considering his eventual international stardom, seeing Bardem chew-up the scenery in a role like this is especially fascinating.

The whole thing is deliberately over the top and, like The Day of the Beast, very-well executed and fast moving. However, Iglesia’s attempts to mine humor from the horrific aren’t quite as successful, which tends to render some of the brutality a little tougher to endure. But while Perdita Durango isn’t always a barrel of laughs, it’s seldom boring (even at 130 minutes) and comes to a terrific conclusion that cleverly interpolates the classic western, Vera Cruz, which was a pivotal moment in Romeo’s childhood. You generally don’t get that kind of poetic symmetry in a sleazy action picture.

Perdita Durango was severely edited and retitled Dance with the Devil for its initial 1997 U.S. release. Believe it or not, this 4K/Blu-ray from Severin Films marks the first time the original cut has ever been available on this side of the pond, so it’s probably a must-own for longtime fans of the director. The film has been nicely restored and comes with some great bonus features, the best being interviews with Iglesias and the story’s original author, Barry Gifford.

“WRITING PERDITA DURANGO” - Interview with co-screenwriter (and original author) Barry Gifford, who explains why he felt compelled to give a minor character from Wild at Heart a story of her own.

“DANCING WITH THE DEVIL” - Filmmaker and Iglesias fan Rebekeh Mckendry discusses the movie.

“NARCOSATANICOS: PERDITA DURANGO AND THE MATAMOROS CULT” - For better or worse, some of the movie is inspired by real shit.