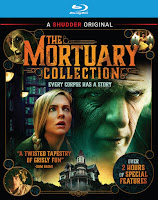 THE MORTUARY COLLECTION - Available on VOD, Digital HD, DVD & Blu-ray on April 20, 2021
Set in the phantasmagorical town of Raven's End, nothing is as it seems.... In THE MORTUARY COLLECTION, a misguided young girl takes refuge in a decrepit old mortuary. There she meets Montgomery Dark, an eccentric undertaker with more than a few skeletons in his closet. Montgomery chronicles the strange history of the town through a series of twisted tales, each more terrifying than the last, but the young girl's world is unhinged when she discovers that the final story...is her own. Written and directed by Ryan Spindell (“50 States of Fright,” The Babysitter Murders), THE MORTUARY COLLECTION stars Clancy Brown (The Shawshank Redemption, Thor: Ragnarok), Caitlin Custer (“Teen Wolf,” “Swingtown”), Christine Kilmer (“Hollywood,” “Shameless”), and Jacob Elordi (The Kissing Booth franchise, “Euphoria”). 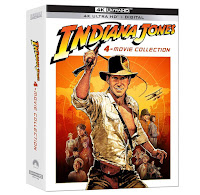 INDIANA JONES: 4 MOVIE COLLECTION on 4K Blu-ray 6/8
The cinematic classic that started it all—Raiders of the Lost Ark—celebrates its 40th anniversary this year, having first introduced audiences to the man with the hat on June 12, 1981. Forty years later, the legendary hero continues to captivate new generations of fans. Now, for the first time ever, all four films are available together on 4K Blu-ray with DOLBY VISION and HDR10 for ultra-vivid picture quality and state-of-the-art DOLBY ATMOS AUDIO. Each film has been meticulously remastered from 4K scans of the original negatives with extensive visual effects work done to ensure the most pristine and highest quality image. All picture work was approved by director Steven Spielberg. The INDIANA JONES 4-MOVIE COLLECTION includes a collectible booklet with behind-the-scenes images from all four films. Each film is presented on 4K Blu-ray Disc with original theatrical trailers and access to digital copies. The set also includes a Blu-ray with seven hours of previously released bonus content. 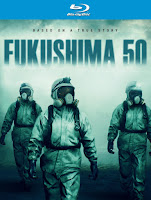 FUKUSHIMA 50 comes to Blu-ray & DVD on 4/13
Japan’s Tohoku Region: at a magnitude of 9.0, the strongest earthquake in the country’s history strikes, triggering a huge tsunami and carnage that would end up killing thousands of people and displacing many more. It mercilessly engulfs the Fukushima Daiichi nuclear power plant in Fukushima prefecture, causing a crippling station blackout. Unable to be cooled, the nuclear reactors quickly turn into hydrogen bombs at the brink of explosion. If the power plant is abandoned, Japan’s destruction is assured. Facing a life or death situation, the power plant workers known as the “Fukushima 50”, including shift supervisor Izaki and plant manager Yoshida, remain on the site until the bitter end. As the world holds its breath, the Fukushima 50 fight for their hometown, their families, and the future of Japan. 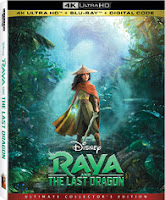 RAYA AND THE LAST DRAGON on 4K, Blu-ray & DVD on 5/18
Raya and the Last Dragon takes us on an exciting, epic journey to the fantasy world of Kumandra, where humans and dragons lived together long ago in harmony. But when an evil force threatened the land, the dragons sacrificed themselves to save humanity. Now, 500 years later, that same evil has returned and it's up to a lone warrior, Raya, to track down the legendary last dragon to restore the fractured land and its divided people. However, along her journey, she'll learn that it'll take more than a dragon to save the world—it's going to take trust and teamwork as well. Raya and the Last Dragon features an outstanding voice cast, including Kelly Marie Tran as the voice of the intrepid warrior Raya; Awkwafina as the legendary dragon, Sisu; Gemma Chan as Raya's nemesis, Namaari; Daniel Dae Kim as Raya's visionary father, Benja; Sandra Oh as Namaari's powerful mother, Virana; Benedict Wong as Tong, a formidable giant; Izaac Wang as Boun, a 10-year-old entrepreneur; Thalia Tran as the mischievous toddler Little Noi; Alan Tudyk as Tuk Tuk, Raya's best friend and trusty steed; Lucille Soong as Dang Hu, the leader of the land of Talon; Patti Harrison as the chief of the Tail land; and Ross Butler as chief of the Spine land.
Posted by D.M. Anderson at 8:48 AM