BREAKING NEWS IN YUBA COUNTY and the Foul Balls 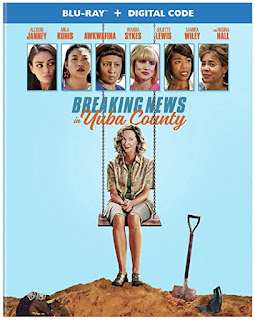 Then there’s manager Tate Taylor. His shelves may not be lined with trophies, but he’s directed some pretty decent - and successful - films in a variety of genres, such as The Help, The Girl on the Train, Ma and Get on Up. With such a diverse filmography, it stands to reason he’d be equally adept tackling a black comedy.

With a team like that on both sides of the plate and a premise rife with satiric opportunities, Breaking News in Yuba County should have been a home run, or at-least a ground rule double. Instead, it mostly hits foul balls.

Sue Bottoms (Janney) is a timid middle-aged woman who’s ignored both at home and work. When she catches husband Karl cheating - during the act - he drops dead of a heart attack. Inspired by the media attention a distraught couple is receiving over their daughter’s disappearance, Sue buries Karl and reports him missing. Now everyone notices her…, neighbors, co-workers and, of course, the media, like sister Nancy (Milas Kunis), who's a local reporter, and eventually national talk show host Gloria Michael (Juliette Lewis).

However, Sue also raises the suspicions of Detective Cam Harris (Regina Hall), who keeps finding holes in her story. Additionally, it turns out Karl and his ex-con brother, Petey (Jimmi Simpson), were coerced into laundering $3 million for local gangster Mr. Kim. But now that Karl’s missing, so is the money. So he sends two violent thugs on the trail, which eventually leads to Sue.

The basic plot is actually pretty well mapped-out, with complications that, in capable hands, could have turned this into another Fargo. However, the whole thing is torpedoed by ham-fisted attempts at dark humor and awful characters painted in depressingly broad strokes. Good black comedy - always difficult to pull off successfully - isn't simply swinging away with extreme behavior and sudden bursts of violence. The cast is ready to play ball, though there’s a hell of a lot of scenery-chewing and their characters are largely defined by their actions, much of which is obnoxiously juvenile. Janney is actually quite good, but even Sue comes across as an empty caricature.Ultimately, Breaking News in Yuba County squanders a good cast and premise because there’s no point where we feel like we’re watching real people. These characters simply exist to behave badly, spout outrageous dialogue and occasionally kill each other. The plot might hold interest for a while, but all attempts at black comedy and satire fall flat. Too bad, really...a team like this should have knocked it out of the park.