ISLE OF THE DEAD: Karloff in Quarantine 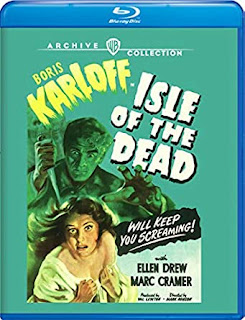 If nothing else, Isle of the Dead is a darkly beautiful horror film. Of all the low-budget flicks producer Val Newton pumped out in the ‘40s, this one is easily the best looking. There’s nary an image that wouldn’t make a great black metal album cover.

Additionally, if one looks hard enough, there’s even some contemporary relevance to be found in the story.

Set during the Balkan War, the island of the title is where General Pherides (Boris Karloff) buried his wife years before. After a particularly bloody battle, he takes a boat to the island to visit her grave, accompanied by reporter Oliver Davis (Marc Cramer). However, the tomb has been desecrated. They also discover an old house where several people have been living. One of them, an archaeologist named Dr. Aubrecht (Jason Robards, Sr) tells him the locals raided the graves for artifacts years ago, while housekeeper Madame Kyra (Helen Thimig) believes it was the work of a volvolaka, an undead monster in Greek folklore.

One at a time, people begin to die, succumbing to sickness later identified by Pherides’ doctor as a plague. He recommends they quarantine themselves on the island until the winds blow the virus clear. Kyra believes a volvolaka is responsible, personified by Thea (Ellen Drew). Initially dismissive of such superstition, Pherides demands everyone to remain on the island and for the dead to be swiftly buried, going as far as to destroy the only boat to insure no one spreads the plague to his troops on the other shore. Later, however, he also begins to believe Thea is indeed responsible for the deaths.

Despite the title and overall aesthetic, Isle of the Dead is not-so-much about the supernatural as it is a descent into madness, namely Pherides and Mary, the latter driven insane after mistakenly being buried alive. Deliberately paced and featuring effectively understated performances, the film emphasizes atmosphere and slow-burning dread over simple shocks and scares.

Because of this, Isle of the Dead holds up pretty well for a 76 year old horror film, belying its age with a great Blu-ray transfer and, considering the ongoing pandemic, an underlying theme that’s surprisingly timely. Pherides may indeed be the film’s primary antagonist, but even though his pragmatic decisions for dealing with the plague don’t sit well with everyone, he is thinking beyond himself for the safety of others. That’s more than you can say about a lot of people right now.