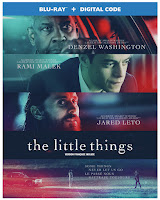 Warner Bros’ THE LITTLE THINGS on PVOD 3/19, Digital 4/20 and Blu-ray/DVD 5/4
Uncover the disturbing secrets in the search for a killer terrorizing the city when “The Little Things” arrives on Premium Video on Demand (PVOD), Blu-ray, DVD and Digital. The film is directed by John Lee Hancock (“The Blind Side,” “Saving Mr. Banks,” “The Founder”) and stars Academy Award winners Denzel Washington (“Training Day,” “Glory”), Rami Malek (“Bohemian Rhapsody”) and Jared Leto (“Dallas Buyers Club”). Kern County Deputy Sheriff Joe “Deke” Deacon (Washington) is sent to Los Angeles for what should have been a quick evidence-gathering assignment. Instead, he becomes embroiled in the search for a killer who is terrorizing the city. Leading the hunt, L.A. Sheriff Department Sergeant Jim Baxter (Malek), impressed with Deke’s cop instincts, unofficially engages his help. But as they track the killer, Baxter is unaware that the investigation is dredging up echoes of Deke’s past, uncovering disturbing secrets that could threaten more than his case. 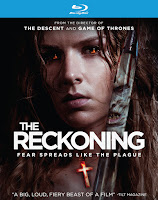 Neil Marshall Returns to Horror in THE RECKONING, on Blu-ray and DVD 4/6
THE RECKONING stars Charlotte Kirk (Ocean’s Eight, Vice, How To Be Single), Joe Anderson (Across The Universe, The Crazies), Steven Waddington (The Imitation Game, “The Tudors”) and Sean Pertwee (Dog Soldiers, Equilibrium). The film was directed by Neil Marshall (The Descent, Dog Soldiers, Doomsday), who co-wrote the film alongside Kirk, (making her feature screenwriting debut), and Edward Evers-Swindell (Dark Signal). In THE RECKONING, after losing her husband during the Great Plague, Grace Haverstock (Kirk) is unjustly accused of being a witch and placed in the custody of England’s most ruthless witch-hunter, Judge Moorcroft (Pertwee). Forced to endure physical and emotional torture while steadfastly maintaining her innocence, Grace must face her own inner demons as the Devil himself starts to work his way into her mind. 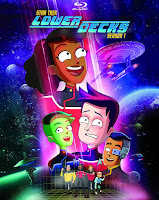 STAR TREK: LOWER DECKS on Blu-ray and DVD 5/18
The animated comedy series beams onto Blu-ray, DVD and limited edition steelbook on May 18 from  CBS Home Entertainment and Paramount Home Entertainment. The must-have collection is  packed with hours of exclusive special features, the highlight of which is “Lower Decktionary,” a  multi-part exploration of the series’ music, art design, animation process and more. Plus, the collection features exclusive interviews with the voice cast, deleted and extended scenes, and a  fan-forward exploration of the series’ many Easter eggs. STAR TREK: LOWER DECKS: SEASON ONE is the first animated Star Trek series in almost 50 years. It focuses on the support crew serving on one of Starfleet’s least important ships,  the U.S.S. Cerritos, in 2380. Ensigns Beckett Mariner (Tawny Newsome, Space Force), Ensign  Brad Boimler (Jack Quaid, “The Boys''), Ensign Samanthan Rutherford (Eugene Cordero, Kong:  Skull Island) and Ensign D’Vana Tendi (Noël Wells, “Master of None”) have to keep up with their  duties and their social lives, while the ship is being rocked by a multitude of sci-fi anomalies. The  Starfleet characters that comprise the ship’s bridge crew include “Captain Carol Freeman,” voiced  by Dawnn Lewis (“The Rich & the Ruthless”); “Commander Jack Ransom,” voiced by Jerry  O’Connell (“Billions''); “Lieutenant Shaxs,” voiced by Fred Tatasciore (“American Dad!”); and  “Doctor T’Ana,” voiced by Gillian Vigman (“New Girl''). 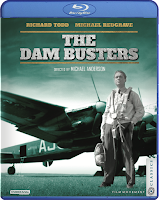 Film Movement Classics Releases Three Restored WWII Classics to Blu-ray on 3/23: THE DAM BUSTERS (1955), DUNKIRK (1958) & ICE COLD IN ALEX (1958)
Commemorate the bravery of a nation at war and experience all the explosive drama across land, sea and air with a stunning trio of classic WWII films from Britain, all digitally restored in HD for optimal viewing. Previously only available in North America in the 5-disc BD collection, THEIR FINEST HOUR, these three acclaimed award-winners are available as individual Blu-ray releases for the very first time, including Michael Anderson's Oscar-nominated THE DAM BUSTERS (1955), as well as two box-office hits, DUNKIRK (1958) and ICE COLD IN ALEX (1958).
Posted by D.M. Anderson at 2:32 PM