HERO DOG: THE JOURNEY HOME is as Safe as They Come 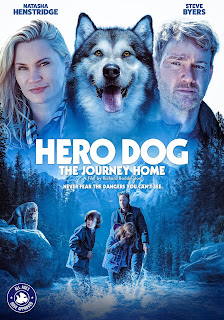 From what I’ve been able to ascertain, writer-director Richard Boddington specializes in low budget family movies, mostly about animals. And although it’s not indicated anywhere in the narrative or promotional material, Hero Dog: A Journey Home is technically a sequel and Boddington’s third film featuring Chinook, an Alaskan Malamute who manages to help hapless humans escape the perils of the wilderness.

But worry not, kids, it ain’t necessary to have seen the other two (Against the Wild & Against the Wild 2). Aside from the same courageous canine and one returning character, they’re pretty much stand-alone films, all with basically the same plot. That being said, Boddington obviously takes family drama seriously. As outdoor adventures go, Hero Dog is so innocuous it makes Homeward Bound look like The Revenant.

Not that there’s anything wrong with being completely inoffensive. In fact, I don’t recall the last family film I saw that didn’t have at least one scatological gag, minor expletive or smart-ass child character. Here, even the moments of danger reflect a conscious effort to avoid being overly upsetting, so when blind dad Royce Davis (Steve Byers) gets stranded in the woods with just Chinook to rely on, not even wee viewers are likely to fear for his safety.

But for a movie called Hero Dog, Chinook himself isn’t a particularly heroic hound (at least by Hollywood standards), mostly providing companionship while Royce bumbles through the woods. Royce’s two bickering kids, Max and Erin, share just as much screen time as they foolishly venture on their own to look for Dad, despite a massive, ongoing rescue mission by local authorities. Max turns out to be so conveniently resourceful that we never fear for their safety, either.

Still, I’m sure Hero Dog is exactly the type of movie many parents are looking for: 100% harmless entertainment they’d feel safe leaving alone with their children. It’s efficiently directed, features serviceable performances (it’s always nice to see Natasha Henstridge still working) and all awkwardly-inserted conflicts are wrapped-up nice & neat before the credits roll. The whole thing is as memorable as a vanilla cone, but there are plenty of far-worse “family” movies out there.

INTERVIEW WITH “GUEST” DIRECTOR ERIN PITT - She acted in one of the earlier films, but is studying to be a director.

This is a great inspiring article.I am pretty much pleased with your good work.You put really very helpful information. Keep it up. Keep blogging. Looking to reading your next post. Relocating from California to Idaho

This is such a great resource that you are providing and you give it away for free. I love seeing blog that understand the value of providing a quality resource for free.
best cooling mat for dogs