RUSSIAN RAID and the Football Hooligans 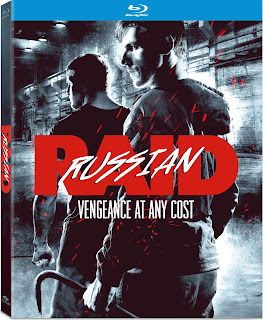 Nikita (Ivan Kitok) is a Russian mercenary who takes a job raiding a factory, which in reality is a front for a weapons trafficking operation run by the mafia. His cocky employer is attempting a very hostile takeover, using Nikita and a half-dozen other hired thugs to strong-arm the mob boss into signing-over the building. However, that boss actually answers to someone bigger...and meaner.

Mr. Bigger ‘n’ Meaner turns out to be Nikita’s real objective, taking the job to avenge his father’s murder. But that plot development isn’t really made clear for quite awhile. In the meantime, Russian Raid is a little bloated with more secondary characters than a movie like this needs. Nikita is a watchable enough antihero, but there are too many bad guys to keep track of.

The worst of them are Nikita’s irritating colleagues, who look and act like douchebags and football hooligans. While I realize their purpose is to serve as the antithesis of Nikita’s calculated coolness, they’re so obnoxious, abrasive and phenomenally stupid that I found myself hoping they’d suffer worse fates than the primary antagonist. Other characters are perfunctory...the token hot chick, the ruthless mob boss, the crooked cop, plenty of henchmen cannon fodder. Even Nikita is pretty much just a vessel for the revenge plot.

But nobody goes into these things expecting character analyses. What ultimately matters is the mayhem. As such, Russian Raid ain’t half bad. There are plenty of kinetic fight scenes and Kitok has some decent moves, enhanced by a camera that never seems to stop moving. The fiery climax, where Nikita’s turns into the usual one-man wrecking crew, holds no real surprises, but ample amounts of gunplay and explosions maintain interest.

At the end of the day, it’s doubtful anyone will walk away thinking they just saw something special. But even though the narrative and characters tread familiar ground, Russian Raid is seldom dull (though the football hooligans' schtick grows old real fast). Competently assembled, it delivers enough shoot-outs and body blows to amuse undiscriminating action fans.