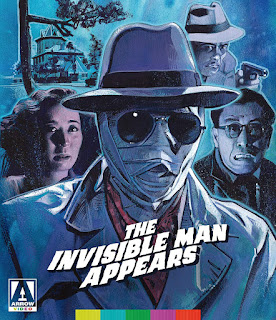 To be honest, I didn’t know either of these films existed, and since this marks the first time they’ve ever been released on home video outside of Japan, chances are most of you didn’t, either. So this double-feature disc from Arrow Video is sure to pique the curiosity of classic horror lovers.

As one might suspect, the two films are Japan’s answer to the popular series of American films and - obviously - H.G. Wells original novel. But they aren’t remakes. Instead, both films incorporate the concept into original stories that play more like sci-fi tinged crime capers than pure horror.

In 1949’s The Invisible Man Appears, a respected doctor has created a serum that can render people invisible, with two unfortunate drawbacks. First, there’s no way for the subject to return to normal, and second, the serum makes the subject increasingly violent. The basic story features the titular character’s reign of terror as he attempts to steal a valuable necklace. In the effort to keep his identity a mystery for much of the running time, the narrative throws in too many plot complications, but it’s fast-paced and the special effects aren’t half bad for a 72 year old film. On a personal side-note, we here at FKMG particularly enjoyed the invisible kitty's own little reign of terror.

I’m not sure The Invisible Man vs. The Human Fly can be considered a sequel. In addition to a completely new cast of characters, the method with which someone is rendered invisible is different. But since one character fleetingly mentions the Invisible Man as a potential suspect in a series of seemingly-random public murders, perhaps it’s a shared universe. The real culprit is the Human Fly, who takes an addictive serum to render himself instantly tiny. Citywide panic ensues, so the cop in charge decides becoming invisible is the only way to catch the killer. This one’s a lot goofier than the first, especially the daffy scenes of the Human Fly in action. Still, it’s pretty entertaining.

Pre-title cards before both films state upfront that time hasn’t been all that kind to the prints used for this Blu-ray transfer. It’s especially noticeable in the first film, but not a major distraction. With a release like this, it’s probably enough that we’re able to see these two Japanese obscurities at all. Neither film will make anyone forget James Whale and Claude Rains, but it’s kinda cool seeing how they did it on the other side of the pond.

TRANSPARENT TERRORS - The only substantial bonus feature, but critic/historian Kim Newman is always enjoyable, this time providing a wealth of information about the entire history of the Invisible Man in movies.

REVERSIBLE SLEEVE - A cover for each film with new artwork.