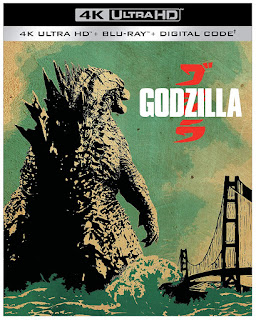 In reviewing this 4K edition of Godzilla, it might be prudent to start with my experience seeing it in theaters.

Prior to 2014, everyone’s favorite ravenous reptile was in a slump. Japan was content to keep cranking out silly spectacles, while the lunkheaded 1998 American remake was Godzilla in-name-only, cashing-in on a familiar brand in an blatant attempt to out-stomp Jurassic Park.

So despite always having a soft spot for the big lug, when yet-another American remake was announced, all I could muster was cautious optimism. Of course I was going to see it, but was the new Godzilla going to be another daffy debacle? Admittedly, any premise involving city-smashing beasties is inherently ridiculous, so trying to get an audience onboard for a “serious” monster movie was always gonna be a tall order. But Godzilla turned out to be awesome, the first film since the 1954 original to more-to-less play it straight.

Godzilla begins somberly, even a bit depressing, during the set-up. It also takes its time; an hour passes before our scaly star first appears in all his 300-foot glory and he’s not even the first mega-monster to show up. Before that, the giant chrysalis of a MUTO (Massive Unidentified Terrestrial Organism) is discovered beneath a nuclear power plant in Japan. A MUTO is a prehistoric parasite that consumes radiation and resembles a giant version of the ‘bugs’ from Starship Troopers. The idiotic powers-that-be have been keeping its existence a secret for years in order to study it. Of course, it gets loose, otherwise there’d be no movie because the MUTO’s appearance is what lures Godzilla out of the ocean depths (yeah, the government knew about him, too, and even tried to kill him back in the 1950s).

I have to admit when I first heard that Godzilla's main storyline was a mega-monster battle, my anticipation deflated just a bit. Pitting Godzilla against an increasingly-ridiculous variety of foes was always the corniest part of those old films. Were they really gonna attempt to do the same thing in this century, only with better special effects and classier actors?

But ironically, this is when Godzilla becomes great, partially because it builds tension with a smart story, but mainly because our title creature is not presented as a hero ready to save humanity. In fact, Godzilla doesn’t give an damn about us. He’s just as destructive as the MUTOs; we’re all just collateral damage resulting from these creatures' hatred of each other. In a way, this makes Godzilla an anti-hero not unlike Clint Eastwood’s Man with No Name. When these monsters finally start duking it out, I kept thinking this was everything Transformers should have been but wasn’t…rousing fun that proves you can make a huge, effects-laden blockbuster without dumbing it down for the booger-eaters in the crowd.

Two hours later, I came out of the theater with my ears ringing and a big dumb grin. Epic in every sense of the word, this was a Godzilla that finally did justice to the big lizard. Though completely serious in tone, the film was not only a visual and aural assault on the senses, it was the kind of grand entertainment you can really only experience in a theater.

This is all to say that the new 4K UHD comes closer to replicating Godzilla’s theatrical thrills than any previous DVD or Blu-ray. The film has always been visually dark, but the transfers of those releases rendered many sequences so murky that it was sometimes difficult to see what was going on. That’s no longer an issue here. Sure, a few scenes are so dimly lit that no home video upgrade is gonna help them. But the train sequence is now just as vivid as it was in theaters, the HALO jump is once-again eye-popping and the climactic clash of creatures regains its destructive clarity. I didn’t notice a huge audio difference between this and the Blu-ray, which was pretty sinus-clearing to begin with. But admittedly, I didn’t really test it out much because the family was sleeping and I didn’t want anyone startled-awake thinking we were under nuclear attack.

Though I’m still not completely sold on all the virtues of 4K, Godzilla definitely benefits from the upgrade. This release doesn’t feature any new supplementary material, content to include the same Blu-ray that had all the original bonus features. The sole reason to pick this one up would be the terrific transfer, which will be worth it for anyone who was wowed in theaters but underwhelmed at home. Cooler cover, too.

MONARCH: DECLASSIFIED - 3 mock-documentaries related to Monarch and the creatures (“Operation: Lucky Dragon,” “”The MUTO File” and “The Godzilla Revelation.”

THE LEGENDARY GODZILLA (Actual Featurettes) - “Godzilla: Force of Nature” (a 19-minute encompassing doc with numerous interviews with cast & crew); “A Whole New Level of Destruction” (title tells all); “Into the Void: The HALO Jump” (for all the destructive mayhem, this is my favorite scene, which is highlighted here); “Ancient Enemy: The MUTOs” (creature design).