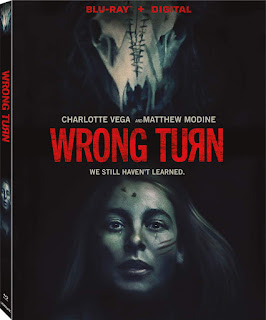 If you absolutely have to reboot a horror film, it only makes sense to pick one that wasn’t all that great to begin with, such as 2003’s Wrong Turn. While competently made, it was unremarkable and pretty derivative of The Texas Chainsaw Massacre. Still, it was popular enough - spawning five mostly shitty sequels - to become something of a brand name.

That brand name is almost all that remains. Other than a group of yuppies who make the fatal mistake of ignoring directions, this is completely unlike any other film in the Wrong Turn franchise...different tone, different plot and definitely different antagonists. From a creative standpoint, this was a wise move. After all, how many more movies about inbred, cannibal hillbillies do you really need?

The wholesale narrative changes are just some of the right turns made by screenwriter Alan McElroy (who also wrote the original film). Once these clueless hikers are confronted by a waaay off-the-grid commune of forest freaks, the story unfolds more like a kindred spirit to Midsommar than yet-another chopfest. Though not as high-minded - some might say pretentious - as Ari Aster’s film, Wrong Turn goes in compellingly unpredictable directions, including its depiction of the backwoods Appalachian clan known as The Foundation. Without giving too much away, what we learn about them occasionally has us questioning who the real villains are.

But for those who fear the film might by steering too far off the beaten path, rest-assured Wrong Turn is still gory as hell, and just because the antagonists are more articulate ultimately doesn’t render them any less monstrous. They dress better, too.

Less interesting is the concurrent storyline of Scott Shaw (Matthew Modine), who’s desperate to find missing daughter Jennifer (Charlotte Vega), one of the unfortunate hikers and the film's main protagonist. While I understand the necessity of these segments - like Scott’s clashes with town locals - they simply lack the same intensity. The film also goes on a bit longer than it needs to, with one-too-many false endings and an unnecessary coda.

Other than that, Wrong Turn makes the right moves. Bolstered by well-defined, inclusively diverse characters, an efficient-yet-deliberate pace and a consistently foreboding tone, the story is intriguing and - God forbid - sometimes thought provoking. Equal parts brains and blood make this a pleasant surprise, a welcome change in direction and the best film in the franchise...by far.