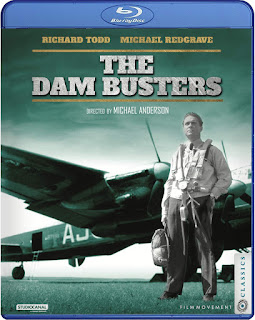 Who says you can’t learn anything from the movies?

If one didn’t know The Dam Busters was a true story, the concept of a “bouncing bomb” might seem more like an outlandish James Bond gadget or video game weapon. It’s a six-ton device designed to be dropped from a low-flying plane, then skips across the water until it reaches its target.

But indeed, the British 617 Squadron managed to destroy two German dams with these things, which severely hampered their steel production capabilities. The mission also killed a lot of people - including allied POWs - which the film chooses not to elaborate on. That’s no big deal, though. It ain’t like American filmmakers back then fretted over collateral damage from their own military’s decisions.

Besides, The Dam Busters presents every other aspect of Operation Chastise in meticulous detail, resulting in a thoroughly fascinating and enjoyable film...save for one extremely cringeworthy aspect all first-time viewers should be aware of. But more on that in a minute.

The first act is primarily focused on Barnes Wallis (Michael Redgrave), an obsessive engineer who develops the bouncing bomb for the specific purpose of destroying three of Germany’s massive dams. Despite conducting dozens of simulations, the government is initially unwilling to fund the real thing, at-least until the military itself gets a look at his work. The narrative then shifts to Commander Guy Gibson (Richard Todd) and the crew he trains to carry-out the mission. Meanwhile, Wallis’ bomb tests aren’t going well. After both men work-out the obstacles and logistics, the final act is the attack itself.

The thrilling bomb run punctuated by remarkable aerial photography and impressive special effects (for the time, anyway). These sequences were the supposed inspiration for the climax George Lucas’ created for Star Wars and one can certainly see the similarities. That, coupled with Wallis’ struggles to make the damn thing work, more than make-up for the film’s overall lack of characterization.

Speaking of characters, one of them is Gibson’s loyal dog, a black Labrador beloved by the entire squadron. This is where things get cringy, kids: The film opens with a pre-title warning of language that might be considered offensive in this day and age, which turns out to be a remarkable understatement because the dog’s name is the N-word. When Gibson gleefully greets him for the first time, my jaw fell open (“Did I just hear that??”). Afterwards, he shows up pretty often and is nearly always referred to by-name. While that was indeed what the pooch was actually called and it’s great the film is restored completely uncensored, it’s still an awful distraction.

But other than that, The Dam Busters is great historical entertainment that’s mostly accurate and practically bursting with British pride (no wonder it was England’s biggest hit that year). And even though the ultimate outcome is a foregone conclusion, the film still manages to create a considerable amount of tension and suspense, especially during the perilous mission. By the way, in addition to Robert Shaw in an early role, watch for a blink-and-you'll-miss-it shot of Patrick McGoohan.

“THE MAKING OF THE DAM BUSTERS” - An excellent 40 minute documentary that provides a lot of background into the production.

SIR BARNES WALLIS DOCUMENTARY - About the man who invented the “bouncing bomb.”

“617 SQUADRON REMEMBERS” - An hour-long doc featuring most of the surviving “dam busters.”

FEATURETTE - “Restoration of a Classic.”