FUKUSHIMA 50: Another Strong Argument for Windmills 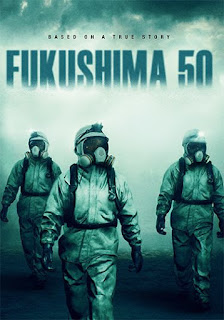 You’d think Three Mile Island, Chernobyl and, most recently, Fukushima would be all the evidence we need to quit fucking with atoms. Sure, they were mostly able to avoid a massive catastrophe in Pennsylvania. But the other two? Not so lucky, with regions of Russia and Japan remaining uninhabitable for years.

Yet even today, over 400 nuclear plants worldwide keep plugging away. Such is the folly of human arrogance.

That arrogance - coupled with considerable short sightedness - is one of the underlying themes of Fukushima 50, based on the true story of attempts to stave off a meltdown at the Fukushima Daiichi Nuclear Power Plant following a massive earthquake and tsunami. The disaster knocks out all power, which means superintendent Masao Yoshida (Ken Wantanabe) and his crew are forced to try and manually cool the fuel rods to keep the reactors from exploding.

Despite selfless efforts by his dedicated staff - which includes volunteers forming ‘suicide squads’ and entering contaminated units to open release valves - Yoshida is often hampered by the impatience and ineptitude of clueless government officials, who are watching the crisis unfold from a safe distance (and giving some pretty reckless orders). Meanwhile, nearby towns are being evacuated before the inevitable.

If you’ve ever seen HBO’s Chernobyl, you might recall the first couple of episodes focused on the crisis as it unfolded. Fukushima 50 is similar to those two episodes but plays more like a traditional disaster movie, including a few unnecessary subplots and histrionic performances typical of the genre. However, the disaster itself is generally pretty gripping. The quake and tsunami hit within the first few minutes, rendered with excellent special effects (mainly because they never look like special effects), while the subsequent race against time - and the ominous implications of failure - create a lot of tension.Most of us probably remember the 9.0 earthquake and tsunami that hit Japan in 2011, but I doubt many were aware of how close the country came to being an uninhabitable wasteland. Fukushima 50 tells that story pretty well, and despite a lot of techno-jargon, in terms we can understand. Though not as shocking or incendiary as Chernobyl, the film offers another strong argument that maybe we’d be better off sticking up more windmills.
KITTY CONSENSUS: