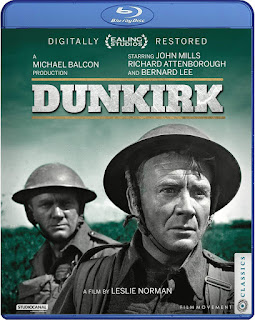 The first thing newcomers will notice is that Dunkirk isn’t solely about the historic military retreat Christopher Nolan would later base an entire film on, so any kind of comparison is unwarranted. Whereas the 2017 film is more of an artistic endeavor, this one is a docudrama that, while fictionalized, effectively weaves-in some of the history leading up to the storied event.

Dunkirk tells three concurrent stories. The first has Bernard Lee as Charles Foreman, a newspaper man who questions the propaganda being released by the British government, who are sugar-coating their military's steady retreat from the advancing German army in France. Meanwhile, his neighbor, John Holden (Richard Attenborough), is initially too wrapped up in his own business to concern himself with the war (partially because he’s profiting from it). Eventually, both men lend their boats to aid in the evacuation, insisting on going themselves, at which time Holden has an epiphany over what’s at-stake.

Additionally, we’re made privy to the British commanders’ failure to stem the German advance, eventually having no choice but to rescue what’s left of their troops at Dunkirk before the enemy converges on them.

But by far, the most interesting narrative thread features a small group of soldiers led by Corporal Tubby Burns (John Mills), who reluctantly assumes command after their CO is killed. They end up being left behind and must make their way north in hopes of rejoining the rest of their company. It’s a perilous trek, fraught with clashes with the enemy as well as each other. Mills looks too old to be playing a corporal, but he brings conviction and vulnerability to the role. The episodic nature of their journey is not-unlike the one later applied in Saving Private Ryan.

These plotlines converge during the final act, the Dunkirk operation itself. From a technical standpoint, the sequence is extremely well done on an epic scale; thousands of soldiers are sitting ducks on the beach as German troops and planes close in. But ironically, it’s also the least narratively engaging. Perhaps that’s partially due to our familiarity with the event (well-documented in books and films over the years). Or maybe because, at this point, it becomes more of an ensemble piece with no particular focus on any of the characters we’ve previously been invested in.

Still, Dunkirk is a compelling chronicle of a pivotal moment in modern WWII history,  made during sort-of a renaissance period for British war films. It wouldn’t be fair to draw comparisons to Nolan’s film (which I consider a masterpiece) because its narrative focus is much different. The dissimilarities instead make them great companion pieces, with this one serving as an intriguing prelude.