CROSSFIRE: A Fistful of Roberts 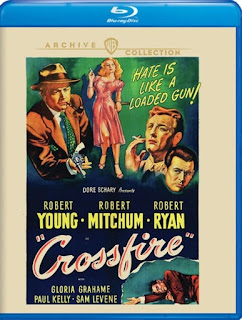 A whole lotta Roberts here - Young, Mitchum and Ryan - all of whom have appeared in their fair share of film noir classics. Then there’s the sultry Gloria Grahame, also no stranger to the genre. In fact, you could say that about a majority of the cast. Director Edward Dmytryk even gives Crossfire the look and feel we most-associate with film noir (though that could be because he didn’t have much of a budget to work with).

However, I hesitate to call it film noir in the purest sense. Narratively speaking, Crossfire unfolds more like a mystery with plenty of pre-Rashomon flashbacks filling in the blanks. It’s also a crime drama with a message, one with a lot more social importance than “Don’t light that seductive dame’s cigarette.” One of the very first films to deal with anti-semitism, the plot involves a brutal murder which is eventually revealed to be a “hate crime,” decades before that was even a term.

Prior to that plot revelation, the primary suspect is Arthur Mitchell (George Cooper), a troubled military corporal who was last seen in the victim’s apartment, a man he just met named Joseph Samuels (Sam Levine). We later learn Samuels was Jewish, and since no other motive can be found, world-weary Detective Finlay (Robert Young) sums it up perfectly: “The killer had to be someone who could hate Samuels without knowing him. Who could hate him enough to kill him, under the right circumstances, for not any real reason but, mistakenly and ignorantly.”

That conclusion, which Samuels expounds on with his own personal experience, is part of the message that ultimately separates Crossfire from traditional film noir. With such ignorant intolerance as a sole motive for murder - accidental or otherwise - the victim could just as easily be a person-of-color, a foreigner or gay (as in the original novel). Classic noir elements set aside, Crossfire’s themes might be even more relevant today than they were in the ‘40s.

But even without unpacking the social baggage, this is terrific entertainment, especially whenever one-or-more of the three Roberts is on-screen. Young gives Finlay equal measures of tough cynicism and quiet empathy that renders Finlay the most interesting character. Mitchum is...well, Robert Mitchum, displaying his usual coolness as Sgt. Keely, who’s convinced of Mitchell’s innocence and goes to extremes to protect him. Robert Ryan has played plenty of heavies in his career, but what makes this performance especially chilling is we know there are scores of people just like Montgomery walking around right now.

On Blu-ray for the first time, the disc boasts an excellent transfer, as well as an interesting archival featurette that summarizes the film’s historical importance. Aesthetics and cast notwithstanding, Crossfire may not be pure film noir, but it’s fast-paced, surprisingly timely and features a fistful of Roberts at their best.