The Golden Age of MOVIE NOVELIZATIONS 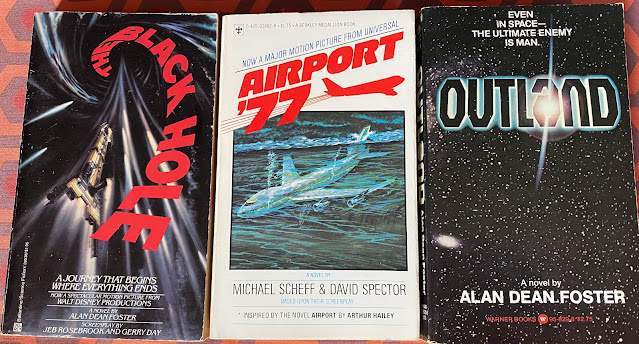 I’m pretty sure the first “grown-up” book I ever bought with my own money was Grizzly, by Will Collins. It was a novelization of the 1976 film that had recently wowed me when I saw it at a theater. The price…a whopping $1.50.

My mom thought it was dumb to blow hard-earned lawn mowing money for a book based on a movie I’d already seen. But not only was it a way to experience the story again, there were just enough differences between the book and the movie to make it interesting…with more descriptive details of the characters and the titular beast. Finishing it in a day - it was pretty short - I think I might have enjoyed it more than the movie itself.

These were the days before home video. Other than waiting for a favorite film to finally air on TV (sometimes years later and heavily edited), novelizations were really the only way to revisit them outside of a theater. Though they've been part of many marketing campaigns as far back as the original King Kong, the ‘70s and ‘80s were the “Golden Age” of novelizations and I read a lot of ‘em…Halloween, The Car, The Black Hole, Capricorn One, The Thing, Empire of the Ants, Airport ‘77, Halloween III, Outland and Jaws 2, just to name a few. Sometimes I’d already seen the film, sometimes I wasn’t able to, and sometimes I just bought them for the covers.

Unlike traditional novels, the typical movie novelization is a marketing tool where someone is hired to adapt an existing screenplay into a book to coincide with the film’s release. They are almost always published as paperbacks and generally run 150-300 pages, depending on the complexity of the story. They never got much respect in literary circles and the authors are basically hired guns, some of whom don’t even receive credit, such as the novelization of the original Star Wars, which is credited to George Lucas, but actually written by Alan Dean Foster.

Speaking of Foster…he probably wrote more novelizations than anyone. In addition to being a respected sci-fi author in his own right, he adapted The Thing, Krull, The Last Starfighter, Outland, Star Trek and Alien into pretty decent books. Some of them, like The Thing, have unique qualities and story elements that differ from the film…

…which sometimes happens when a novelization is being written before wholesale changes are made to the screenplay during production. A great example is Jaws 2, by Hank Searls. The movie may be middling, but the book is great. Far more plausible and character-driven than the movie - with certain aspects of the plot that are much different - not only is it a thrilling read, it’s even better than the crappy Peter Benchley novel that started the whole Jaws phenomenon. And because I read it before seeing the movie, the latter ended up being a dumbed-down disappointment. It was immediately clear that, at one time, Jaws 2 had the potential to equal its predecessor.

With everyone now able to revisit any film pretty much whenever they want, movie novelizations don’t have the appeal that they used to, but are still published here and there. Quentin Tarantino adapted his own film, Once Upon a Time in Hollywood, into a novel, complete with a throwback cover that recalls the Golden Age. Even Alan Dean Foster has recently pumped out novelizations of Alien: Covenant and Star Wars: The Force Awakens.

For the most part, though, novelizations are products of the past. Still, you can still find some of these old relics if you look hard enough. Lately, I’ve begun collecting titles I grew up on, finding them in the nooks and crannies of used book stores. Sometimes they’re only a buck or two and in good condition, a far cry from what some hopelessly optimistic sellers are asking on Amazon or eBay.

However, one old title has so-far continued to elude me…that novelization of Grizzly on which I blew my hard-earned lawn mowing money all those years ago. Copies are out there, but fetching anywhere from $35-60 from the places I’ve checked. I’m not quite nostalgic enough to risk my marriage on a book that once cost me a buck-and-a-half. For now, it'll have to remain the Holy Grail of my wish list.
Posted by D.M. Anderson at 5:16 PM