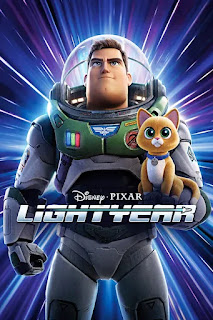 LIGHTYEAR (Digital Review)
2022 / 105 min
FROM DISNEY/PIXAR
Review by Stinky the Destroyer😺
Add LIGHTYEAR to your collection now on Digital and on 4K, Blu-ray and DVD September 13.

“In 1995, a boy named Andy got a Buzz Lightyear toy for his birthday. It was from his favorite movie. This is that movie.”

This brief pre-title intro cleverly establishes Lightyear as a product in the Toy Story universe, not a film that takes place in it. Hence, the characters look slightly less exaggerated, and with the exception of Sox the Robot cat, move more like flesh & blood human beings.

Buzz himself looks and sounds a bit different, too, which apparently bothered some butthurt fanboys when Tim Allen wasn’t brought back to provide his voice. Here, he’s voiced by Chris Evans, who does a great job establishing the “real” Buzz Lightyear as different from his toy counterpart. And if said-fanboys had bothered to take a look at their own action figure collections, they’d realize that, contextually, “new” Buzz is actually “original” Buzz, so the change makes complete sense. With rare exceptions, tie-in toys never completely resemble the actors who played them, often intentionally in order to avoid paying to use their likeness. So shut up, fanboys.

The film itself drops Buzz into a fairly straightforward sci-fi story, an action-adventure with dashes of the type of existentialism one might find in the Star Trek franchise. However, the plot is the least remarkable aspect of Lightyear. You could replace Buzz with a completely new & well-conceived hero without making significant changes. I would also argue that Buzz is the blandest character here. Though certainly likable, he mostly serves as straight-man to the quirky supporting characters. Ironically, the most engaging new character, Sox, wouldn’t look out-of-place in an actual Toy Story movie. As Buzz’ robot companion, he provides some of the film’s biggest laughs.

Speaking of which…even though it still features plenty of humor, clever allusions to classic sci-fi films and the studio’s usual quota of self-referencing Easter Eggs, Lightyear is more action driven than the typical Pixar film. It isn’t as warm, sentimental or touching, but does continue Pixar’s inclination for social inclusion and representation, which is always worthwhile. Trolls, of course, will cry “woke,” maybe some of the same neanderthals screaming about the absence of Tim Allen (perhaps they can console each other at a rally somewhere).

For everyone else, Lightyear is great family entertainment which, in a way, could be considered an origin story, but that’s not entirely accurate. The film itself exists in the Toy Story universe, which ultimately prompted my daughter to ask, “Is this an animated character’s version of watching a live-action movie?” That’s a really good question.

FEATURETTES - “Building the World of Lightyear”; “The Zap Patrol”; “Toyetic”.