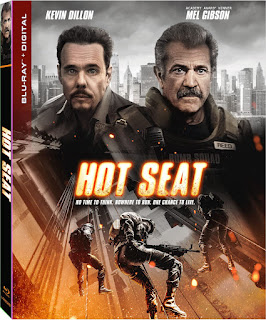 Somewhere inside Hot Seat is a good thriller screaming to get out. Unfortunately, a decent concept is undone by bad writing and an overall sense of smallness.

You know you’re in trouble when the very first scene produces more chuckles than tension, in which an unnamed man is blown up in a park by a mad bomber. The explosion is depicted with laughable special effects that wouldn’t pass muster in a SyFy Channel cheapy, instantly setting the bar pretty low.

The story itself has potential, that of reformed computer hacker Orlando Friar (Kevin Dillon), who’s forced to commit a series of cyber-heists at the behest of the same bomber. He’s seated at his office desk, but can’t leave because there’s a bomb under his chair. If Orlando doesn’t do what he’s told, it’ll explode. Though neither he nor the audience see the bomber, we certainly hear him, barking orders and making threats through the office PA system (sounding like Kylo Ren with his mask on). He’s also setting-up Orlando to take the fall as a bomber with a terrorist agenda.

Outside, cops are ready to storm the building to blow him away, but grizzled bomb squad cop Wallace Reed (Mel Gibson) is the sole voice of reason, suspecting he’s being set-up (mainly because Orlando’s wife says he’s not capable of such a thing). What follows is the usual game of cat & mouse between Orlando and the bomber while Reed clashes with his superiors and makes all the right calls.

There aren’t any real surprises (not even the bomber’s identity), but the concept itself is sound. In fact, a recent South Korean thriller, Hard Hit, is an excellent, tension-filled example of the same premise. But that film benefitted from smart writing, well-developed characters and - most significantly - a budget befitting the scale of the story. Conversely, Hot Seat is not-only cheap looking, the characters are all lazy composites…the worried wife, the overzealous SWAT team, the overconfident villain, the doomed sidekick, etc. Lazy writing is also obvious in the so-called “techno” aspects of the story, which consist of hyper-edited computer screen montages while Dillon types fast.

Overall, the performances are actually pretty good. Typical of films like this, most of the cast has seen better days, but Dillon & Gibson acquit themselves quite well; even Shannon Doherty brings some earnestness to a fairly thankless role. Too bad it’s all in the service of something so slapdash and cheap. With a few more rewrites - and maybe some wider wallets - Hot Seat could have been a tight little thriller. Instead, this one leaves us cold.