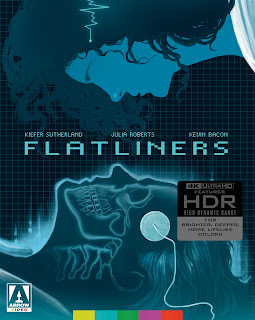 Until now, Flatliners has never been very well presented on home video, not even Blu-ray.

It was a fairly sizable hit in 1990, especially since Pretty Woman had just turned Julia Roberts into a bankable star. But like much of director Joel Schumacher's work, it's undoubtedly a product of its time and typical of the type of high-concept horror favored by major studios, featuring a beautiful cast with great hair who normally wouldn't be caught dead dabbling in the genre. Along with Days of Thunder, Flatliners might be the most 80s movie that wasn't actually released in that decade. Its glossy production and hot ensemble cast made it play more like Young Guns & The Lost Boys than any serious exploration of what lies beyond death. And that's just fine, because it was still enjoyable in the moment.

Flatliners has always been one of those films we watched and then moved on…out of sight, out of mind. At least until someone would happen to bring it up during a conversion and we’d recall, "Isn’t that the one with Kiefer Sutherland? I seem to remember it being pretty good."

Maybe that’s why it’s always been unceremoniously thrown out on home video whenever a new format was introduced. Sony’s DVD and Blu-ray releases were little more than perfunctory. Then Mill Creek Entertainment gave it a shot a few years ago, even creating a decent looking SteelBook package for the occasion. But they totally dropped the ball with the movie itself…no extras and - typical of Mill Creek - zero attempt to upgrade the picture or sound.

But hell, the movie must have its share of fans. Why else would they follow it up with a (crappy) sequel/remake 27 years later?

Those fans are gonna absolutely love Arrow Video’s new 4K UHD release. While far from the best 4K picture I’ve ever seen, it’s the best Flatliners has ever looked in any previous format…by a wide margin. The film sounds great, too, serving up DTS-HD Master Audio in both 5.1 and 2.0. And for the first time - a big batch of brand new bonus features are thrown in, including numerous interviews with various people involved behind the scenes. This release also gets my vote for Arrow’s best looking cover of the year, with super cool artwork.

Aesthetically, the movie itself certainly shows its age, but remains reliably entertaining without ever being memorable, emphasizing style and its photogenic cast over themes or substance. Whether it’s viewed as a slab of fond nostalgia or an overlooked gem by a new audience, one thing is certain…Flatliners hasn’t gotten this much TLC since it was first released

“THE CONQUEST OF OUR GENERATION” - Interview with screenwriter Peter Filardi.