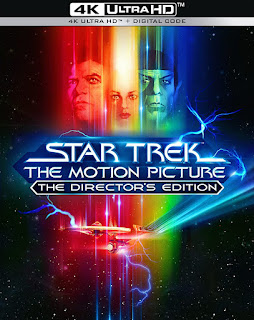 This is the best Star Trek: The Motion Picture has ever looked or sounded, including its original theatrical release 40+ years ago. With all the editing tweaks, FX upgrades and restorations applied to it over the years - capped by a gorgeous 4K UHD overhaul done just this year - it almost plays like a different film from the historically maligned version many of us grew up with.

As someone who did see it when it premiered in theaters back in ’79, my overall positive assessment of the movie itself is somewhat tainted by no small amount of sentimentality. My mother took me to see this during Christmas vacation and it was her idea, which sort of surprised me. I was at that age when we weren’t really communicating all that much (no major problems…just me being a teenager) and had no idea she was a closet Trekkie, which was sort of a revelation. Dad’s general contempt for all things sci-fi precluded talking him into going, so seeing Star Trek: The Motion Picture in a theater ended up being one of my last purely Mom & son outings before “outgrowing” such things. Since she's no longer with us, perhaps that’s part of the reason I carry more of a nostalgic torch for this Trek than subsequent ones.

As hard as it may be to believe today, Star Trek: The Motion Picture was a pretty incredible theater experience. Sure, the special effects were sometimes wonky, but more-often jaw-dropping, such as our first look at the Enterprise and the entire V’Ger flyover sequence, both presented in looong, loving detail. And yeah, the film was a little slow, the dialogue clunky - even corny at times - and the performances pretty stale. Yet conceptually, this film arguably adhered closer to the high-minded, cerebral nature of the original series than any other film in the franchise. If not quite the out-of-body experience of Star Wars or Close Encounters, it was still enjoyably immersive, warts and all.

But over the years, a lot of those warts were removed. It’s no secret that Star Trek: The Motion Picture was a troubled production and rushed into theaters before it was really complete (a fascinating tale in its own right) and director Robert Wise was allowed to revise the film in 2001, which included fixing many of the pacing and special effects issues. Even further upgrades were made 20 years later for its 4K restoration. Nothing can be done about the dialogue or performances, nor will I refute the long-standing criticism that the iconic cast was simply dropped into a story that could just as easily exist without them. However, unlike the unwelcome and distracting changes George Lucas made to Star Wars, the Director’s Edition seamlessly blends old and new to create a better film…perhaps a new one that just happened to take 40 years to finish.

Regardless of one’s opinion of the movie itself, it looks and sounds stunning in 4K. While the original 1979 version was released in 4K just last year as part of a boxed set, this 2-disc set is still worth picking up. Not only is the 2022 version a considerable improvement, the story behind it is just as entertaining and this release includes a big batch of all-new bonus features to go along with vintage material carried over from previous discs. A must own for fans, this is one of the best home video releases of the year. Mom would've loved it.

“THE HUMAN ADVENTURE” - An all-new 50-minute, 9-part documentary, mostly featuring individuals involved with the 2022 4K restoration, who share personal insights & views on the film and its creators, as well as the process of updating the look and sound. Great stuff, with plenty of side-by-side scene comparisons.

COMPUTER DISPLAY GRAPHICS - A closer look at the individually animated images used for the scenes on the bridge.