The Continuing Irony of ROLLERBALL 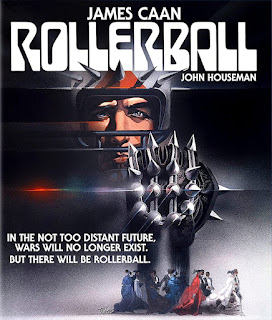 Taking place in the “not too distant future,” Rollerball depicts a future ruled by powerful corporations. War, poverty and disease are a thing of the past, and all that’s expected in return is that people don't question how decisions are made. The most popular entertainment in the world is Rollerball, an ultra violent mash-up of roller derby, football, motorcycle racing and gladiatorial combat.

Rollerball was created by corporations to demonstrate “the futility of individual effort,” changing the rules more often than the NFL in order to assure no heroes emerge from the game. One does, of course…Jonathan E (James Caan), a beloved Rollerball champion who refuses to retire as instructed by Energy Corporation executive Bartholomew (John Houseman). So they keep altering the game to be even more violent, anticipating that Jonathan will die playing it.

Back in 1975, Rollerball was hugely influential, at least on me and my friends when we decided to try playing the game ourselves that summer. Granted, we didn’t have motorcycles, roller-skates, spiked gloves or a steel ball capable of tearing your head off, but we did have Schwinns, skateboards, gardening gloves, baseball helmets, a duct tape-wrapped softball and two trash cans placed on opposite ends of our cul-de-sac to serve as goals.

We weren’t the only ones inspired, either. Even the cast & crew of Rollerball played the game in their free time between takes.

The ultimate irony of Rollerball is that director Norman Jewison intended the film to be a dystopian commentary on violent entertainment and expected audiences to be appalled by the sport’s brutality. Instead, he and screenwriter William Harrison (who also wrote the original short story) created such a perfectly conceived and visually stunning spectacle - with a clear set of rules - that we all wished it was a real fucking sport. The movie was even the subject of a Sports Illustrated article and spotlighted on ABC’s Wide World of Sports. Hell, I still wish Rollerball was real, though the game’s copious human attrition would make drafting any kind of fantasy team a complete crapshoot.

Furthermore, as cinematic dystopias go, the world depicted in Rollerball doesn’t really seem all that bad. There’s no poverty, no warring nations, no one suffering discernible hardships. People exist in drug-enhanced luxury, dressed in the best designer fashions the 70s had to offer. Even Jonathan lives in a high-tech ranch spread with his own personal helicopter, making it difficult to muster much sympathy for his dilemma.

Yep…the future in Rollerball looks A-OK. Unless you’re a woman, of course. By 2018, women are essentially property with no personal freedoms. Considering recent real-life government actions which threaten women’s body autonomy, it’s equally ironic that the one aspect of Rollerball that might now be the most timely - maybe prophetic? - is its dubious depiction of women’s roles (especially with the decision-makers consisting mostly of middle-aged white guys).

But I digress…nobody who’s ever watched Rollerball has given two shits about its themes or commentary on society’s ills. It was - and still is - all about the game itself. Nearly five decades later, the game sequences remain jaw-dropping triumphs of superior stuntwork, brutal action and some of the best editing of any sports-themed movie ever made. These scenes alone - which comprise about a quarter of the running time - are worth the price of admission and endlessly rewatchable (with your remote handy to skip the pokier bits).

Rollerball has been released on Blu-ray by various boutique companies over the years (the most comprehensive being Arrow Video’s 2015 UK version). However, this disc features a new 4K scan and the overall picture is a significant improvement (cleaner and more vibrant than any version I’ve seen, anyway). While most of the bonus features are older ones, a wonderful piece with the late, great James Cann (shot for the Arrow release) is also included, as well as a brand new interview with Bob Minor, who was one of the stuntmen and looks back fondly at the experience.

“BLOOD SPORTS” - From 2015, a 10-minute interview with actor James Caan, who recalls preparing for the physical aspects of the role and discusses some of the film’s themes.

NEW INTERVIEW WITH BOB MINOR - Minor was a stuntman on the film.

“FROM ROME TO ROLLERBALL” - Vintage featurette.